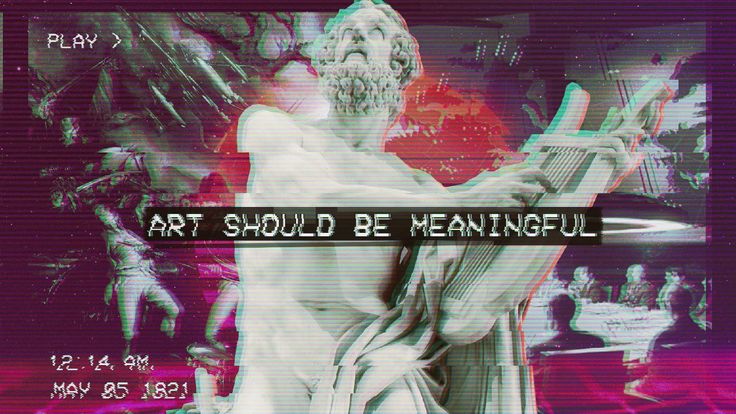 Art Should Be Meaningful

Fashwave is foremostly a political genre of music and aesthetics containing explicit alt-right, Fascist, and far right symbolism and themes.[1] With references to many far-right political figures from Julius Evola [2] to Donald Trump, Fashwave ultimately integrates the far right into its own artistic movement, creating a synthesis of stylistic elements scattered from the Classical Era to the 1980’s.

Fashwave is dually defined on the two mediums it is created over. The first medium is art, in which Fashwave incorporates the use of 80’s retro-futurist [3] aesthetics in conjunction with far-right iconography as to conjoin both elements of the past and present, as well as the corresponding notions of tradition and progression. This ultimately conveys the need to clamor to tradition, even while acknowledging that rapid technological and scientific progression of society is debasing it, and is an unstoppable force society ought to learn to tame as opposed to destroy.

The second medium is music, which, in essence, imposes the same aforementioned paradigm. Given this second medium, said elements further render Fashwave into a dynamic audiovisual platform, where modern techno music and 80’s style synthwave [4] are adapted to enhance the mood created by the retro-futurist visuals.

Left-leaning online magazine, Mic, called Fashwave "Suicidal retro-futurist art"[5] in a January, 2018 article, intended as a hit piece. Since then the article has been syndicated by other outlets, only to increase the popularity of the electronic music genre.

The article by Mic incorporated at video describing the topic and was featured on Red Ice TV in an editorial critique.[6]

The consensus surrounding the popularization of Fashwave is that it followed the lead with the beginning of Donald Trump’s campaign in June of 2015.[7]

Only five months later, "perennial" piece of Fashwave surfaced on Youtube, [8] which was a music video entitled Galactic Lebensraum [9] by C Y B E R N Δ Z I, one of the most notable Fashwave producers with over 12,000 subscribers and over 300,000 views.[10]

Over a year later in February of 2016, Fashwave began to acquire mainstream notoriety, as media outlets such as Rave News reported the headline: “Vaporwave Artists [Are] Mad That Their Music is Popular With Fascists” [11] in which prominent DJ’s such as DJ Karoda Nite called a meeting among other popular vaporwave and techno artists with the intention of stopping the coalescence of Fascism into the genre.

Among a more like-minded audience, Fashwave first gained recognition with the far right news website The Daily Stormer [12], which published an article in August of 2016 deeming the genre “The Official Soundtrack of the Alt-Right.” ,[13]

Across both music and visual platforms, Fashwave is most commonly comprised of retro-futurist themes with classicism[14] or fascistic art deco [15] styles. 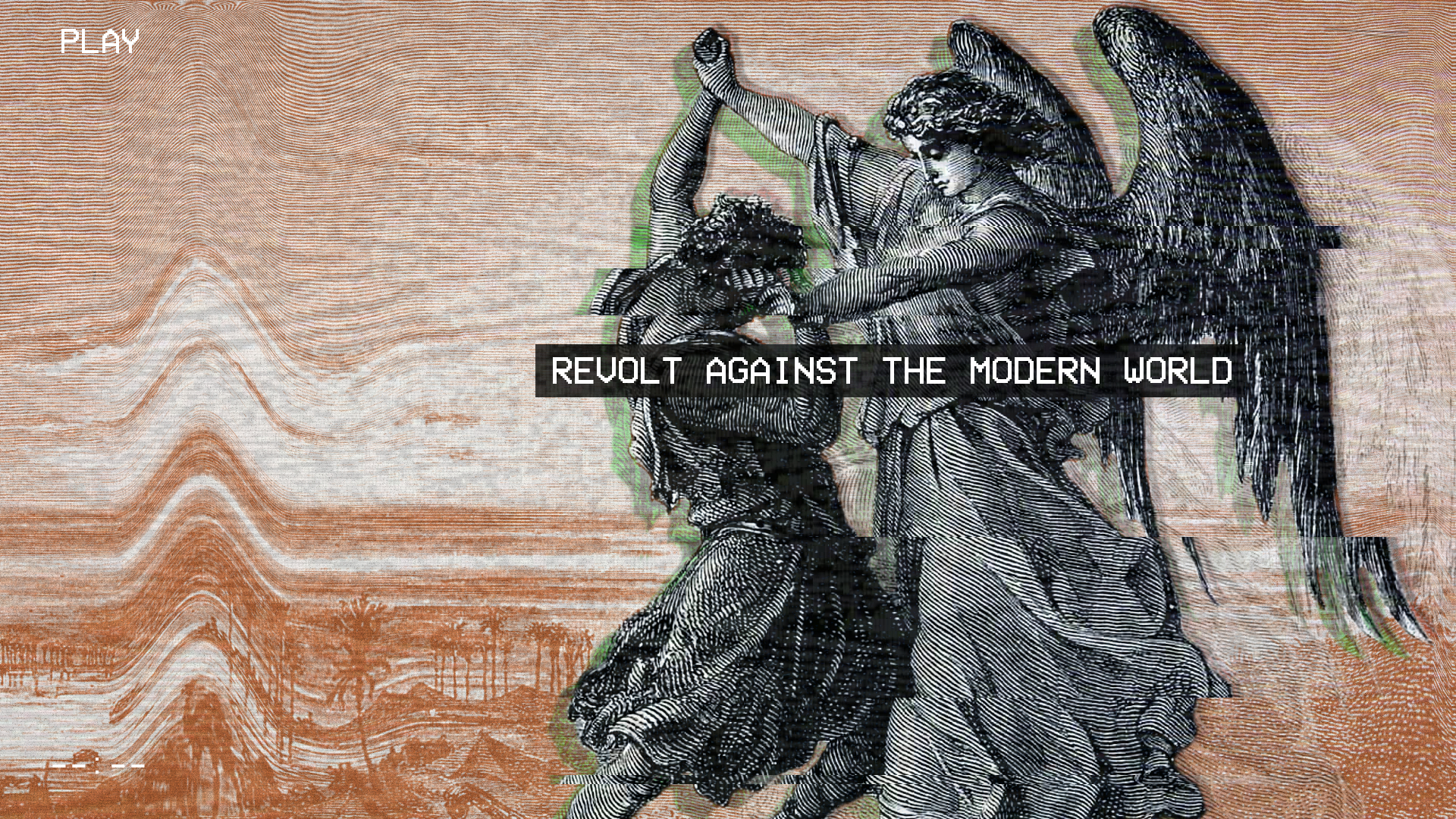 “Jacob Wrestling with the Angel” by Gustave Doré. From WikiMedia

In Fashwave’s most common rendition, the inclusion of classicist symbology and 80’s synthwave elements conjoin, as evident in this edit of Gustav Doré’s painting “Jacob Wrestling with the Angel.” For the former, the stylistic elements of position indicate a potent and authoritative figure (the angel). The connotations of the top right position are paired with the angel’s status as a biblical archetype of purity and tradition, which seems to be resisting the attacks of Jacob (bottom left) with ease, as his position connotes the contrary: Weakness, submissiveness, etc. Given the two dichotomized positions and their representations, Fashwave often rides off of the authoritativeness of archetypes that classical characters and human figures possess, as to give supremacy to tradition in society, which is ultimately exemplified with the text “Revolt Against the Modern World”, corresponding to the representation of the angel.

For the latter, the image is distorted significantly on the left center side, which, when considering the text reading “Play” at the top left, suggests that the creator intended to emulate the common distortions created by a television set when a VHS tape is running. Thus, it is as if the viewer is witnessing the grand struggle of tradition and order from thousands of years ago on a mere TV set in the present. Here, Fashwave’s common elements of the past/future paradigm are central to it. 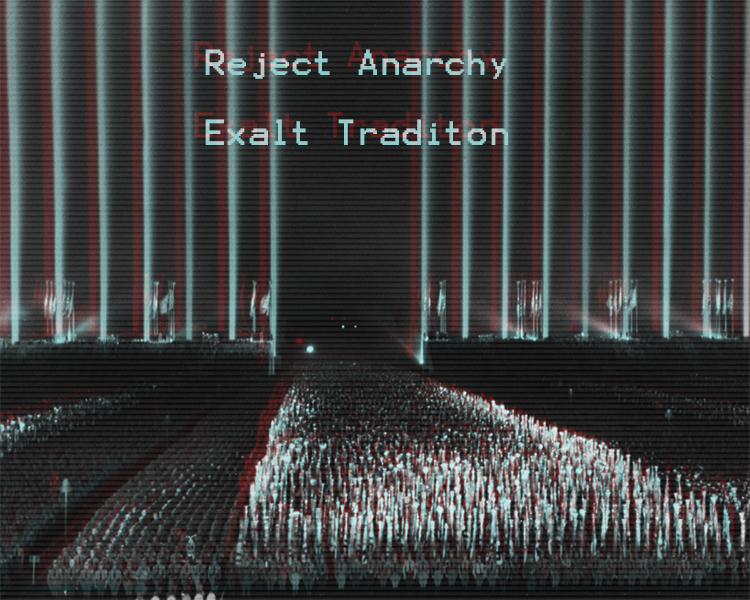 In this piece which adapts a shot from the 1937 Nuremberg rally in Nazi Germany, aside from noting the clear color distortion filters giving the piece a hint of red and blue to compliment a techno 80’s vibe, art deco elements of natural geometric symmetry are present. This is exemplified with the art’s focal point of solid, numerous, and symmetrically defined light beams, which are at the end of where the observer's eyes are lead to from the three-point perspective the regiments of men are aligned in. As the ranks seem to become slimmer further back due to three point perspective, this lends a logical pathway for the eye to follow, which will end at the beams. Also, note the juxtaposition of the text “Reject anarchy” as it is overlaid with an absolute order in shapes and alignment common to art deco. This not only ultimately reinforces the style’s emphasis on absolute symmetrical uniformity, but incorporates Fashwave’s progression v tradition dualism, as the piece considers the differences between tradition and its seemingly anarchic alternative.

Noting the clear references to the future, such as the text stating the year this piece takes place in is “2036”, or the obvious exaggeration of architectural modernism, [17] this type of fashwave is the most reliant of 80’s aesthetics, and the least reliant on classical and art deco elements. Here, the 80’s neon lights and colors serve as the prime colorization and theme for the visuals within the piece, such as with the red and purple emanating from the lower division of the picture, or the red and blue spiraling up the tower backdrops behind the focal points of the pyramid, which has a purple compliment to its black backdrop. With extensive neon in the foreground, the vibrancy is still well noted throughout the piece with its black juxtapositions for background colors. In essence, the colors hint at the future- not only the fact that it is inevitable, but it will be almost overwhelming- yet not to a point of dismay, but rather of embracement, as the influence of Trump will still continue to harbor a sense of nationalism regardless.