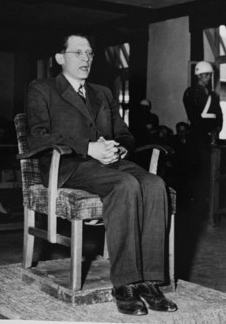 Eugen Kogon (1903 - 1987) was a prisoner at Buchenwald and a "witness" for the politically correct view on the Holocaust.

"One of the most widely read books on the German wartime camp system is a detailed study written shortly after the end of the war by former Buchenwald inmate Eugen Kogon. This much-praised work, published in the United States under the title The Theory and Practice of Hell, reports that at Auschwitz alone there were “at least 3,500,000 victims, probably 4,500,000."" Kogon thus reported the Soviet propaganda numbers on Auschwitz as true. Today even non-revisionists agree that these numbers are false.[1]

Kogon was a fellow inmate of the revisionist Paul Rassinier in Buchenwald. "When Rassinier read Kogon’s 1946 book, he became so upset over what, in his view, were the distortions, exaggerations, and plain lies written in it – particularly the blotting out of the responsibility of his communist comrades for many of the atrocities committed in the camps – that he wrote a book of his own (Rassinier 1950, Engl. 1990), in which he criticized Kogon’s account.... In his introduction, Kogon himself wrote that he had presented his manuscript to former leading camp prisoners “in order to dissipate certain fears that the report could turn into a sort of bill of indictment against leading camp inmates." When the reproach was made to Kogon that his book Der SS-Staat was a polemical pamphlet, a suit for slander was the result, which Kogon nonetheless lost. In its judgment, the court stated"[2]

If one considers that there were two members of the USSR and eight Communists among the fifteen representative men to whom he read his report in order to dissipate fears that he would present a bill of indictment, then the impression given is that, regardless of the mention of atrocities committed by Communists, this circle of persons above all would be spared, […]. Such considerations must be foreign to a scholarly work. Pure science does not inquire as to whether the result makes this person or that person uncomfortable. Where questions of expediency co-determine the content, objectivity is lost. Therefore, when the defendant, as a fellow-prisoner, expresses his opinion that the ‘SS State’ is a pamphlet, then he is making free use of his constitutional right to free expression of opinion, without thereby infringing upon the right of personal honor of the complainant”.