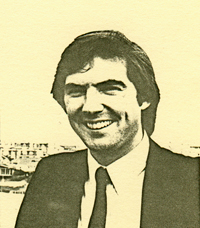 William David McCalden (20 September 1951 – 15 October 1990) was a British founder of the Institute for Historical Review (IHR), served as its first director, and edited the IHR's Journal of Historical Review.

After leaving the IHR in 1981, McCalden published revisionist material under the imprint of Truth Missions, including Revisionist Reprints and a "Holocaust" News broadsheet. From 1981 until 1990, he issued the David McCalden Revisionist Newsletter, which reported on his own activities, and monitored the broader revisionist scene.[1]

McCalden was the author of several booklets, including Nuremberg and Other War Crimes Trials, Exiles From History, and The Amazing, Rapidly Shrinking 'Holocaust. He also produced a video based on his visits to Auschwitz and the sites of other wartime German camps, and his skeptical examination of the "gas chambers" there. [1]

At a public meeting in Los Angeles on 7 June 1989, "McCalden was attacked by Irv Rubin and other thugs of the "Jewish Defense League." They beat McCalden badly, inflicting bloody facial injuries."[1]

During the mid-1970s, he was active in the National Front. For a time, he was editor of the party newspaper Nationalist News, and was a regular contributor to the Britain First newspaper.[1]

Proud of his Ulster heritage, McCalden was an ardent defender of the rights and interests of northern Ireland's Protestant population. [1]

He was also anti-authoritarian and anti-National Socialist.[1]