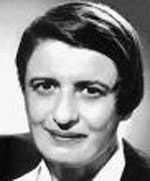 Ayn Rand (2 February 1905 – 6 March 1982), born Alisa Zinovyevna Rosenbaum, was a Jewish author who created Randian Objectivism, which is an extreme variant of classical liberalism. It has been important for the development of the (right-wing) libertarian movement more generally.

Born and educated in Russia, Rand emigrated to the United States in 1926. She worked as a screenwriter in Hollywood and had a play produced on Broadway in 1935–1936. She achieved fame with her 1943 novel, The Fountainhead. In 1957, Rand published her best-known work, the novel Atlas Shrugged. Afterward, she turned to non-fiction to promote her philosophy, publishing her own periodicals and releasing several collections of essays until her death in 1982.