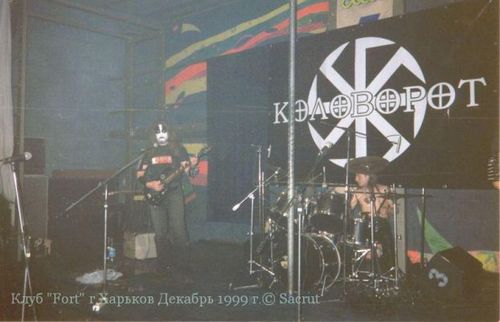 Astrofaes is a Ukrainian black metal band from Kharkiv. The band is active from 1996. It is a project of Thurios (Hate Forest) and Khorus (Khors).

After the formation band released the demo Ad Infinitum, live album The Attraction: Heavens and Earth (live), and their second, The Attraction: Heavens and Earth by autumn of 1997. Despite trouble maintaining a record label, the group managed to continue its productivity; by 2005 Those Whose Past is Immortal marked their eighth release. Astrofaes have employed Saturious and Munruthel, both involved in Nokturnal Mortum and Lucifugum, for keyboards and drums respectively; however, neither are considered members of the band.

Like many other black metal outfits from Ukraine, Astrofaes focus heavily both musically and lyrically on Slavonic pride and folklore and bear an atmospheric element less evident in their Scandinavian counterparts. Astrofaes are also erroneously classed as a NSBM band.

The band had released recently their last work Idea. Form. Essence... on November 2007 and Shu Nun EP in 2008.

Part of this article consists of modified text from Wikipedia, and the article is therefore licensed under GFDL.
Retrieved from "http://en.metapedia.org/m/index.php?title=Astrofaes&oldid=440390"
Categories: