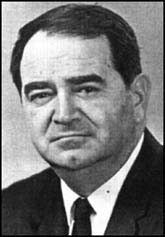 As Forrest Carter he also faked an autobiography, The Education of Little Tree, in which he portrays himself as having been orphaned into the care of Cherokee grandparents. The publisher's remarks in the original edition describe him (inaccurately) as "Storyteller in Council" to the Cherokee Nation, but in 1976, as the book became a huge success and appering on the top of The New York Times booklist, Forrest Carter was revealed to be Asa Earl Carter.

Asa Carter was born in Anniston, Alabama in 1925, the eldest of four children. He was raised in nearby Oxford, Alabama by his parents, Ralph and Hermione Carter, both of whom lived into Carter's adulthood.

Carter served in the United States Navy during World War II and attended the University of Colorado. After the war, he married India Thelma Walker. The couple had four children and settled in Birmingham, Alabama.

Asa Carter was an active participant in the White Citizens' Council becoming the executive secretary of the North Alabama Citizens’ Council. He was expelled from that organization and formed a more radical group he named the Original Ku Klux Klan of the Confederacy.

He was a radio commentator and became a speechwriter for governor of Alabama, George C. Wallace. Carter is credited for writing Wallace’s 1962 inaugural speech containing the famous line, In the name of the greatest people that ever tread the earth, I draw the line in the dust and toss the gauntlet before the feet of tyranny, and I say: Segregation now! Segregation tomorrow! Segregation forever!.[1]

Although Carter claimed to be part Cherokee, he ran for governor of Alabama in 1970 on a pro-white, anti-intergration platform. However, he came in last of five candidates, winning only 1.51% of the vote in an election comfortably won by George Wallace.

After losing the election, Carter relocated to Florida and then Texas, where he reinvented himself and began his career as a novelist. He distanced himself from his past, began to call his sons "nephews" and renamed himself Forrest Carter, in honor of Southern Civil War general Nathan Bedford Forrest.

Carter completed one more novel, Watch for Me on the Mountain, a fictionalized biography of Geronimo. He was working on The Wanderings of Little Tree, a sequel to The Education of Little Tree and a screenplay version of the book when he died in 1979 from injuries he received in a fistfight.

Asa Carter is buried in a small church cemetery near Anniston, Alabama at the intersection of Jones Road and DeArmanville Road.[2]

Books about Carter's faking of ethnicity

Articles about Carter's faking of ethnicity

Part of this article consists of modified text from Wikipedia, and the article is therefore licensed under GFDL.
Retrieved from "http://en.metapedia.org/m/index.php?title=Asa_Earl_Carter&oldid=462850"
Categories: