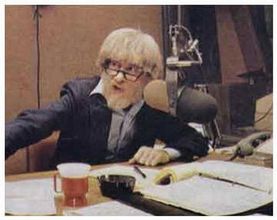 His murder has been claimed to be similar to a scene in the fictional novel The Turner Diaries, written by William Luther Pierce, first published in 1978, six years before Berg's murder. In the book, an unnamed Jewish radio talk show host is shot dead as he steps from his car in his own driveway.

Four members of the Silent Brotherhood were tried and two were convicted of "violating the civil rights" of Alan Berg. David Lane and Bruce Pierce were sentenced to what amounted to life sentences.

The district attorney declined to prosecute on murder charges, saying the evidence wouldn’t stand up in court.[1]

David Lane in his writings apparently did not deny certain of the crimes the Silent Brotherhood were accused of, but did reject involvement in the murder of Alan Berg, who may have had many enemies due to his controversial radio talk show and stated involvement in various crimes. Lane wrote that "He was rabidly Jewish and had caused embarrassment among the Chosen with outspoken commentary. After a trip to Israel he noted, "This time the Jews would either rule the world or blow it up." He had at one time been a lawyer for organized crime figures in Chicago, and his uncontrolled mouth was no doubt a source of worry to unsavory characters of all stripes. According to jailhouse scuttlebutt he, also, was involved with cocaine distribution and used cocaine to obtain the sexual favors of young girls. I have no way to verify the truth of the cocaine charges." The witnesses testifying for the prosecution were argued to have falsely done so in exchange for immunity and other rewards. During the judicial process, judges, prosecutors, and even appointed defense attorneys were stated to include several Jews, possibly creating conflicts of interest.[2]

Part of this article consists of modified text from Wikipedia, and the article is therefore licensed under GFDL.
Retrieved from "http://en.metapedia.org/m/index.php?title=Alan_Berg&oldid=444068"
Categories: