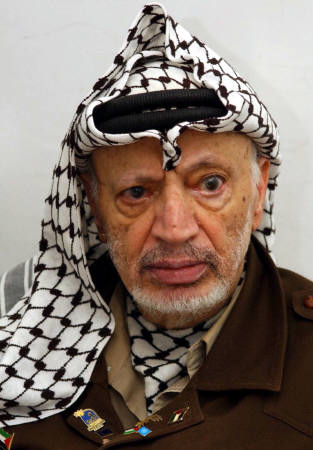 Mohammed Abdel Rahman Abdel Raouf Arafat al-Qudwa al-Husseini (August 24, 1929 – November 11, 2004), popularly known as Yasser Arafat was a Palestinian leader. He was Chairman of the Palestine Liberation Organization, President of the Palestinian National Authority, and leader of the secular Fatah organization which he founded in 1959. Arafat spent much of his life fighting against Israel in the name of Palestinian self-determination. Opponents considered him a terrorist, supporters a freedom fighter. Originally opposed to Israel's existence, he modified his position as well as renounced violence and was awarded the Nobel Peace Prize together with Yitzhak Rabin and Shimon Peres for peace negotiations.

His death in 2004 has caused much debate with a common theory being that he was assassinated by means of polonium poisoning.

Part of this article consists of modified text from Wikipedia, and the article is therefore licensed under GFDL.
Retrieved from "http://en.metapedia.org/m/index.php?title=Yasser_Arafat&oldid=413980"
Categories: