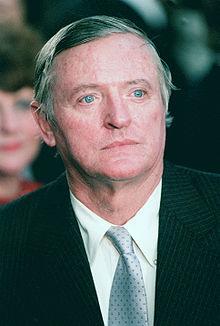 William Frank Buckley Jr. (born William Francis Buckley; 24 November 1925 – 27 February 2008) was an influential American conservative or libertarian, with Buckley using both terms to describe himself. In 1955, Buckley founded the influential National Review. He also hosted many episodes of the public affairs television show Firing Line (1966–1999), the longest-running public affairs show in television history with a single host. George H. Nash, a historian of the modern American conservative movement, said that Buckley was "arguably the most important public intellectual in the United States in the past half century. For an entire generation, he was the preeminent voice of American conservatism and its first great ecumenical figure."

However, as late as 2000, a critical article stated that while the National Review had become more politically correct on many issues, it still published some politically incorrect views, such as having defended The Bell Curve. The article also noted that in 1998 Buckley demoted the two men most responsible for the magazine's anti-immigration tone.[1]

Although not described as a neoconservative, Buckley has been described as having a key role in removing anti-Semitism from conservatism. Buckley worked with the Jewish Willi Schlamm when creating the National Review. Another influence was the Jewish Frank Meyer and his theory of "fusionism" – a political philosophy described as uniting elements of libertarianism and traditionalism.

Buckley has also been described as "the man who created intellectual space for the libertarian movement [...] He kicked out the racists and conspiracy-mongers from conservatism and embraced Chicago and Austrian economists, introducing a new generation to Hayek, Mises, and Friedman."[2]

National Review editor Rich Lowry has stated that "Mr. Buckley's first great achievement was to purge the American right of its kooks. He marginalized the anti-Semites, the John Birchers, the nativists and their sort."

The influence of the National Review was in part due to there being few other very prominent right-wing publications and Buckley being willing to spend large sums to spread his views. Buckley said in 2005 that the magazine had lost about $25,000,000 over fifty years. Another reason may have been its relative political correctness, such as on Jewish issues, making it somewhat acceptable to mention in mainstream sources with a large Jewish influence.

Part of this article consists of modified text from Wikipedia, and the article is therefore licensed under GFDL.
Retrieved from "http://en.metapedia.org/m/index.php?title=William_F._Buckley_Jr.&oldid=468380"
Categories: