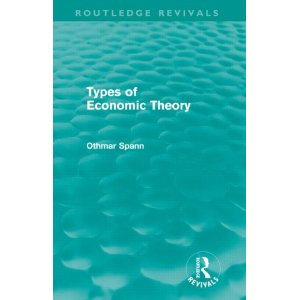 Types of Economic Theory by Othmar Spann is a book over 300 pages in length explaining various economic theories across history and also further explaining their relationship to and critiqing them from the perspective of the "Universalist" worldview (Spann's worldview), which is anti-individualist and nationalist and upholds corporatist economics. This worldview, contrasted to liberal and modern socialist views, is strongly influenced by German Romantic philosophy, especially as expressed by Adam Müller.

1. Economics in the Days Before the Mercantile System
2. The Mercantile System
3. Individualist Natural Right
4. An Introduction to the Basic Problem of Sociology-Individualism Versus Universalism
5. Transition to the Physiocratic System
6. The Physiocrats
7. Fully Developed Individualism, or Classical Political Economy
8. Political Economy in Germany
9. Carey’s Optimism and Its Counterparts on the Continent of Europe
10. A Short Account of the Evolution of Socialism
11. The Historical School, Social Reform, the Theory of Marginal Utility
12. Present-Day Economic Science

This same book also appeared in English under an alternative title: History of Economics (New York: Norton, 1930). Despite the differeing title, the content is nearly identical.