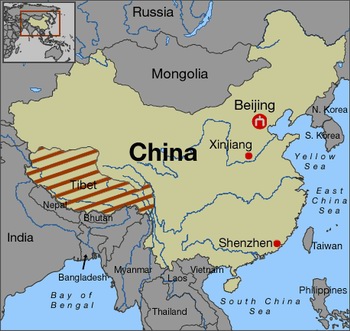 Tibet is a plateau region in Central Asia and the home to the indigenous Tibetan people. With an average elevation of 4,900 metres (16,000 ft), it is the highest region on Earth and is commonly referred to as the "Roof of the World."

Tibet was once an independent kingdom[1] but today is part of the People's Republic of China (PRC) while a small part, according to the government of the People's Republic of China, is controlled by India. Currently, the PRC government and the Government of Tibet in Exile still disagree over when Tibet became a part of China, and whether the incorporation into China of Tibet is legitimate according to international law[2]. Since what constitutes Tibet is a matter of much debate neither its size nor population are simple matters of fact, due to various entities claiming differing parts of the area as a Tibetan region.

A unified Tibet first came into being under Songtsän Gampo in the seventh century. The government of the Dalai Lamas, a line of Tibetan spiritual leaders, nominally ruled a large portion of the Tibetan region from the 1640s until its incorporation into the PRC in the 1950s. During most of this period, the Tibetan administration was subordinate to the Chinese empire of the Qing Dynasty. As a measure of the power that regents must have wielded it is important to note that only three of the fourteen Dalai Lamas have actually ruled Tibet. From 1751 to 1960 regents ruled for 77 percent of the time. [3]

Part of this article consists of modified text from Wikipedia, and the article is therefore licensed under GFDL.
Retrieved from "http://en.metapedia.org/m/index.php?title=Tibet&oldid=411649"
Categories: