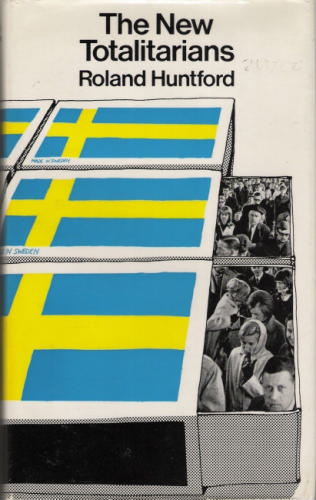 The New Totalitarians is a 1971 book by British author Roland Huntford. (ISBN 0713902604) Huntford analyzes the political and social climate of early 1970s Sweden, and argues it resembles a "benevolent" totalitarian state in the mould of Aldous Huxley's Brave New World.

At the time, Sweden was a nation controlled by the Social Democratic Party of Sweden, which had ruled the country's government for over 40 years. Huntford argued that this had led to the complete dominance of socialist thought at all levels of the government, including the bureaucracy and the judiciary, which were all controlled by a powerful interconnecting network of Social Democratic labour unions, lobby groups, and partisan organizations. He likewise argued that these networks made it very difficult for non-socialists to get to any position of real power in Sweden, but noted that few Swedes seemed to view this massive politicization of their state with concern.

The New Totalitarians also analyzes Swedish society in a broader historical context, arguing that since the country bypassed the feudal system and has always been a very centralized state, Sweden never really developed a culture that champions individualism like other countries of Western Europe. He thus argues that the country's political culture and institutions are very much the product of a unique socio-political context, and thus not applicable to other states in the west.

This book is a warning. It is a terrifying portrait of an "ideal" society that has destroyed democracy in the name of "progress." Roland Huntford demonstrates by fact after shocking fact how an apparently democratic, prosperous, peaceful Utopia is totally controlled by a bureaucracy which actively discourages all signs of individuality.

3. Industrial Peace and the Rise of Modern Sweden 49

8. Agitprop and the Perpetuation of the Regime 147

11. Education in the Service of Conditioning 204

14. Culture in the Political Armoury 305

15. The Sexual Branch of Social Engineering 325

The book greatly influenced Canadian author Peter Brimelow, and is repeatedly cited in his similarly-themed 1986 book on Canada, The Patriot Game.

Part of this article consists of modified text from Wikipedia, and the article is therefore licensed under GFDL.
Retrieved from "http://en.metapedia.org/m/index.php?title=The_New_Totalitarians&oldid=438701"
Categories: