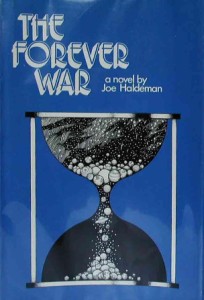 Cover of the first edition.

The Forever War is a 1974 military science fiction novel by the American author Joe Haldeman.

The novel is widely perceived to be a portrayal of the author's military service during the Vietnam War, and has been called an account of his war experiences written through a space opera filter.

One aspect of the book is humanity being transformed into homosexual, racially mixed clones and the protagonist's growing feeling of alienation. This may possibly be a reference to the societal changes occurring due to the 1960s counter-culture and Cultural Marxism.

Part of this article consists of modified text from Wikipedia, and the article is therefore licensed under GFDL.
Retrieved from "http://en.metapedia.org/m/index.php?title=The_Forever_War&oldid=450366"
Categories: