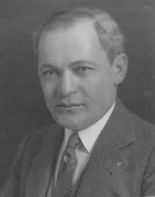 Samuel Dickstein (5 February 1885 – 22 April 1954) was a Jewish Congressman from New York. He played a key role in establishing the committee that would become the House Committee on Un-American Activities, which he used to attack to attack claimed fascists and communsits.

He was also a paid agent of the Soviet NKVD and involved in other criminal activities. Even Wikipedia states that "Moscow concluded that Dickstein was "heading a criminal gang that was involved in shady businesses, selling passports, illegal smuggling of people, [and] getting citizenship." [...] Dickstein denounced the Dies Committee at NKVD request ("a Red-baiting excursion") and gave speeches in Congress on Moscow-dictated themes. He handed over "materials on the war budget for 1940, records of conferences of the budget subcommission, reports of the war minister, chief of staff, etc." according to an NKVD report. [...] The Boston Globe stated: "Dickstein ran a lucrative trade in illegal visas for Soviet operatives before brashly offering to spy for the NKVD, the KGB's precursor, in return for cash." [...] Kurt Stone wrote that Dickstein "was, for many years, a 'devoted and reliable' Soviet agent whom his handlers nicknamed Crook." Joe Persico wrote, "The files document Soviet spying by Representative Samuel Dickstein of New York, so greedy that his handlers gave him the code name Crook.""

One of the first investigations of Dickstein's Committee was the alleged Business Plot. See the article on this topic.

Other allegations involved the Friends of New Germany and William Dudley Pelley.

Wikipedia also states that "Democratic leaders in the House distrusted Dickstein. They were unaware of his spying or his bribery, but they did know he brutally browbeat and threatened witnesses, grossly exaggerated evidence and they removed him from membership on the committee. [...] In September 1945, not long before stepping down from office, Dickstein called the investigations into Hollywood "a lot of ballyhoo" about an industry that is almost "100 per cent American" and also asserted that "the alien problem is dying away."."

Part of this article consists of modified text from Wikipedia, and the article is therefore licensed under GFDL.
Retrieved from "http://en.metapedia.org/m/index.php?title=Samuel_Dickstein&oldid=443421"
Categories: