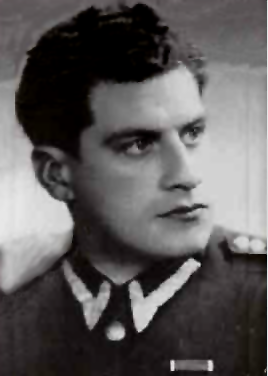 Salomon Morel (15 November 1919 – 14 February 2007) was a Communist Polish Jew and commander of concentration camps run by the Soviet NKVD and Polish communist authorities. After the fall of Communism, he was investigated for war crimes and crimes against humanity, mass murder of prisoners. In 1996, Morel was indicted by Poland on charges of torture, war crimes, crimes against humanity and communist crimes.

An Eye for an Eye: The Untold Story of Jewish Revenge Against Germans in 1945 is a 1993 book by the Jewish John Sack, in which Sack stated that some Jews in Eastern Europe took revenge on persons allegedly associated with earlier mistreatment of Jews while overseeing over 1,000 concentration camps in Poland for German civilians. Sack provides details of the imprisonment of 200,000 Germans "many of them starved, beaten and tortured" and estimates that "more than 60,000 died at the hands of a largely Jewish-run security organisation." Morel was one of the Jews mentioned in the book.

Morel had fled to Israel in 1992 and was granted citizenship under the Law of Return. Poland twice requested his extradition, once in 1998 and once in 2004, but Israel refused to comply and rejected the more serious charges as being false and again rejected extradition on the grounds that the statute of limitations against Morel had run out, and that Morel was in poor health; Israel also cited Morel's Jewish background as a specific reason not to extradite him. Polish authorities responded by accusing Israel of applying a double standard.

An Eye for an Eye: The Untold Story of Jewish Revenge Against Germans in 1945

Part of this article consists of modified text from Wikipedia, and the article is therefore licensed under GFDL.
Retrieved from "http://en.metapedia.org/m/index.php?title=Salomon_Morel&oldid=446954"
Categories: