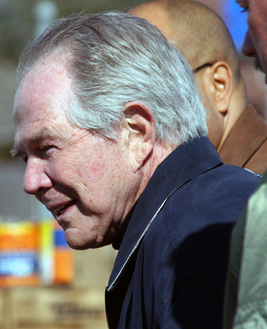 Marion Gordon "Pat" Robertson (born 22 March 1930) is an American media mogul, televangelist, political commentator, former Republican presidential candidate, and former Southern Baptist minister. Robertson advocates a conservative Christian ideology and is known for his past activities in Republican party politics. He is associated with the Charismatic Movement within Protestant evangelicalism. He serves as chancellor and CEO of Regent University and chairman of the Christian Broadcasting Network (CBN). He appears daily on The 700 Club, CBN’s flagship television program. Spanning over five decades, Robertson has had a career as the founder of several major organizations and corporations as well as a university. He is also a best-selling author. As a result of his seeking political office, he no longer serves in an official role for any church.

Robertson has been associated with many controversies, such as in association with various controversial statements and claims, often of a religious nature. Other criticisms include on financial issues.

Wikipedia classifies Robertson as a Christian Zionist, although mentioning criticisms of his 1991 book The New World Order, which describes a New World Order conspiracy theory, which some critics have interpreted as including covert anti-Semitic elements, which has been denied by Robertson.

Apparently, there are few controversies due to views by Robertson on issues such mass immigration and race and intelligence.

Part of this article consists of modified text from Wikipedia, and the article is therefore licensed under GFDL.
Retrieved from "http://en.metapedia.org/m/index.php?title=Pat_Robertson&oldid=452715"
Categories: