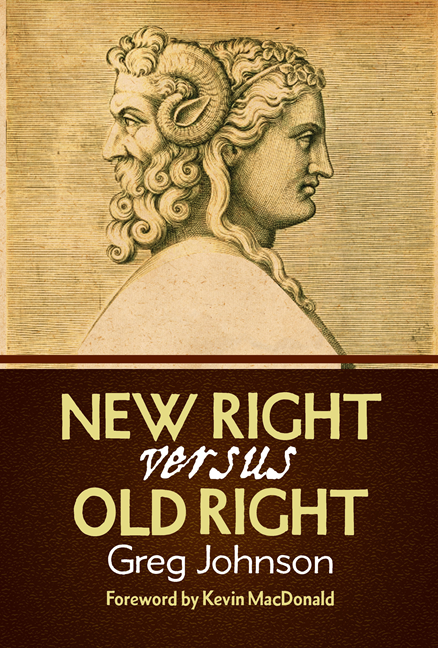 Cover of New Right vs. Old Right by Greg Johnson

New Right vs. Old Right is a book consisting of essays by Greg Johnson and a foreword by Kevin MacDonald.

Despite using the term "New Right", this is explicitly used in a different sense from that of the European New Right.

Publisher description: "Dr. Greg Johnson draws upon the ideas of the European New Right to promote a new approach to White Nationalist politics in North America. New Right vs. Old Right collects 32 essays in which Dr. Johnson sets out his vision of White Nationalist “metapolitics” and distinguishes it from Fascism and National Socialism (the “Old Right”), as well as conservatism and classical liberalism (the “Phony Right”).

Dr. Johnson rejects the Old Right’s party politics, totalitarianism, imperialism, and genocide in favor of the metapolitical project of constructing a hegemonic White Nationalist consciousness within a pluralistic society. He argues that White Nationalists are too dependent on the model of hierarchical organizations and need also to work on creating resilient lateral networks. He offers New Rightist answers to a number of disputed questions within the White Nationalist community, including white culpability for our decline, Hitler and National Socialism, the Jewish question, the holocaust, the role of women, Christianity vs. paganism, and the relationships of populism, elitism, and democracy. He sets out some basic principles for creating a growing, resilient, networked movement. Finally, he criticizes distractions and dead-ends like “mainstreaming,” conservatism, “premature” populism, and political violence."