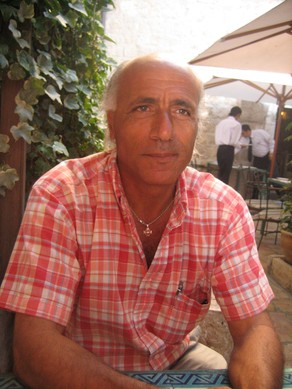 Mordechai Vanunu (also known as John Crossman) is an Israeli former nuclear technician and peace activist, who, citing his opposition to weapons of mass destruction, revealed details of Israel's nuclear weapons program to the British press in 1986. He was subsequently lured to Italy by the Israeli intelligence agency Mossad, where he was drugged and abducted.He was secretly transported to Israel and ultimately convicted in a trial that was held behind closed doors.

Vanunu spent 18 years in prison, including more than 11 in solitary confinement, though no such restriction is mentioned in Israel's penal code, nor imposed by his verdict. Released from prison in 2004, he was further subjected to broad array of restrictions on his speech and his movement, and arrested and imprisoned several times for violations of his parole terms, giving interviews to foreign journalists and attempting to leave Israel. He claims having suffered "cruel and barbaric treatment" at the hands of prison authorities, and suggests that these would have been different if he had not converted to Christianity.

Many critics argue that Vanunu had no additional information that would pose a real security threat to Israel and that its government's only motivation for the continued restrictions is to avoid political embarrassment and financial complications for itself and allies such as the United States. By not acknowledging possession of nuclear weapons, Israel avoids a US legal prohibition on funding countries that proliferate weapons of mass destruction. Such an admission would prevent Israel from receiving billions each year in military and other aid from the United States.

A less often mentioned explanation for his criticisms of Israes is that he is stated to have developed a particular resentment for what he viewed as the dominance of Israeli society by Ashkenazi Jews, and the perceived discrimination against Sephardi and Mizrahi Jews from the Middle East and North Africa. He felt that he was looked down on by those who ran the Dimona facility due to his Moroccan origin. According to Dr. Ze'ev Tzahor of Ben-Gurion University, "he projected a deep sense of deprivation. He assumed an Ashkenazi dominance in Israel that encompassed all social strata and an Ashkenazi consensus closing off all possibilities of advancement for Oriental Jews."

Part of this article consists of modified text from Wikipedia, and the article is therefore licensed under GFDL.
Retrieved from "http://en.metapedia.org/m/index.php?title=Mordechai_Vanunu&oldid=451896"
Categories: