Metaphysics of War — Battle, Victory and Death in the World of Tradition is a collection of essays by the Italian political and religious theorist and philosopher Julius Evola. It was originally translated, compiled and published by Integral Tradition Publishing, but was shortly thereafter republished by its successor Arktos.

Evola brings together a group of examples from diverse sources, including the Aryan and Islamic traditions in order to demonstrate how Traditionalists can improve themselves through experiencing war in such a manner that it allows them to transcend the limitations of a materialistic age. Thereby they will be able to step over the threshold into a world of heroism, higher consciousness and gain an effective understanding of the purpose of life. His call to action cannot be compared to that made by present day military leaders, whom don't expect any more by a warrior than that he shall serve as a soldier to a decadent class. Evola presents the warrior living an integrated life - someone absorbing a specifically Aryan world-view. A warrior that doesn't see political targets as justifications for war, but rather as an opportunity wherein the warrior can realize his calling towards a higher form of existence.

"These essays, originally written by Evola during the 1930s and '40s, deal with war from a spiritual and heroic perspective. Evola selects specific examples from the Nordic, Vedic, Roman, Persian, Islamic and other traditions to demonstrate how traditionalists can prepare themselves to experience war in a way that will allow them to overcome the limited possibilities offered by our materialistic and degraded age, thereby transcending the Age of Kali and entering the world of heroism by achieving a higher state of consciousness, which Evola depicts as an effective realisation of the ultimate purpose of life."

"His call to action, however, is not that of today's armies, which ask nothing more of their soldiers than to become mercenaries in the temporary employ of a decadent class. Still less is it a call to misdirected or nihilistic violence. Rather, Evola presents the warrior as one who lives an integrated and purposeful way of life - one who adopts a specifically Aryan view of the world in which the political aims of a war are not its ultimate justification, but rather war is seen as merely a means through which the warrior finds his calling to a higher and more complete form of existence beyond the political, and in accordance with the teachings of the great spiritual texts. More importantly, he shows how the ideal of the warrior extends beyond the battlefield into other aspects of traditional living, even in times of peace."

"Julius Evola (1898-1974) was an Italian traditionalist, metaphysician and political philosopher. He remains a leading authority on the world's esoteric traditions and one of the greatest critics of modernity. He wrote extensively on the ancient civilisations and beliefs of both East and West and the world of Tradition. His principal works include Revolt Against the Modern World, The Path of Cinnabar (also published by Arktos), The Hermetic Tradition and The Yoga of Power."

Opinions on the Book 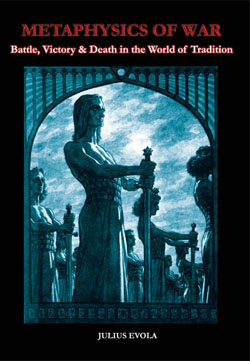 Cover of the first edition from ITP.

"Metaphysics of War is a lucid translation, which allows the reader to access Evola’s fervently intense prose and encyclopedic knowledge of Tradition with relative ease. However, this is not a book I would recommend as a starting point for those without a general familiarity with Evola’s life and ideas or grounding in the historical context in which the essays were given birth.

Being a series of essays written over a wide span of years and journal issues, each offering contains a fair degree of recapping and repetition of core themes and material common to serializations. Saying that, however, this collection is by no means a dry assembly of “Evoliana” or apocryphal relics. Rather, these writings contain meta-historical insights and inspiration that are still valid and interesting, over sixty years after their writing."

"These essays constitute what is certainly the most radical attempt ever made to justify war. This justification takes place essentially on two levels: one profane, the other sacred. At the profane (meaning simply “non-sacred”) level, Evola argues that war is one of the primary means by which heroism expresses itself, and he regards heroism as the noblest expression of the human spirit. Evola reminds us that war is a time in which both combatants and non-combatants realize that they may lose their lives and everything and everyone they value at any moment. This creates a unique moral opportunity for individuals to learn to detach themselves from material possessions, relationships, and concern for their own safety."