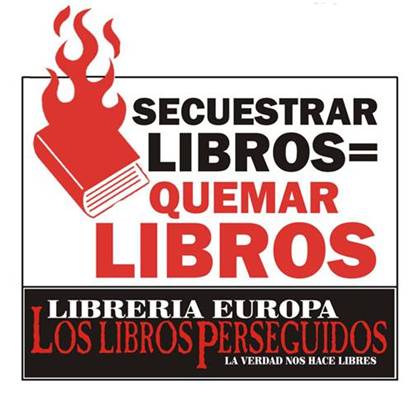 The Librería Europa in spanish or Library Europe in english is an innovative project of distance-selling entertainment products and covers all developments in this area, respecting the law. Located in Barcelona (Catalonia, Spain). It is owned by Pedro Varela, former president of CEDADE [1].

In 1996, the Librería Europa was taken over by order of the Chief Prosecutor of Catalonia, considering that it was a center of Nazi apologia, in the register, the Catalan police intervened file organization and 20,900 books CEDADE fundamentally revisionist content. The library not closed, and indeed still open today.

Pedro Varela, owner of the bookstore, was tried in 1998 for questioning the Holocaust [2], on charges of incitement to racial hatred and apology Holocaust, and was sentenced to five years in jail, imposed a heavy fine economic and ordered the destruction of 20,900 books. The Provincial Court of Barcelona, ​​however, considered one of the laws used to convict Varela may be unconstitutional, so the decision was appealed to the Constitutional Court of Spain, which ruled on November 17, 2007 that the denial of Holocaust falls under Freedom of speech [3].

On April 10, 2006 police and court ordered a new entry into the Librería Europa and seized about 6,000 books of Ediciones Ojeda, Pedro Varela related editorial that publishes books on nacionalsocialist and revisionist content.

In 2010 a court in Barcelona sentenced to a term of one year three months imprisonment for the crime of genocide dissemination of ideas in addition to sentencing him to one year and six months, because it violates the fundamental rights and freedoms public guaranteed by the Constitution [4].

The library has been the subject of repeated attacks carried out by members of anti-fascist groups or extreme left members.

In January 1999 there was a fire caused by unknown authors. They stormed the offices of breaking into the library, piling and burning books in a bonfire in the street and also destroying the facility [citation needed].

Coinciding with the general strike on Wednesday September 29, 2010 there was another attack on the Library carried out by left-wing groups. This attack included the smashing of shop furniture and computer equipment (by using paving stones and sharp objects), plus lots of books that were damaged by the use of tar and deviled eggs with red paint [citation needed].