Josef Kramer (b. 10 November 1906 in München, Kingdom of Bavaria; d. 13 December 1945 in Hameln) was a German officer of the SS, a sub-commandant of the Auschwitz camp, a commandant of the Natzweiler-Struthof camp and the Bergen-Belsen camp. After the war, he was the main defendant at the first Belsen trial in 1945. The first Belsen trial is notable for having mostly occurred before the more well-known Nuremberg trials and with the sentencing occurring before the first sentencing during the Nuremberg trials. Kramer was executed in 1945. 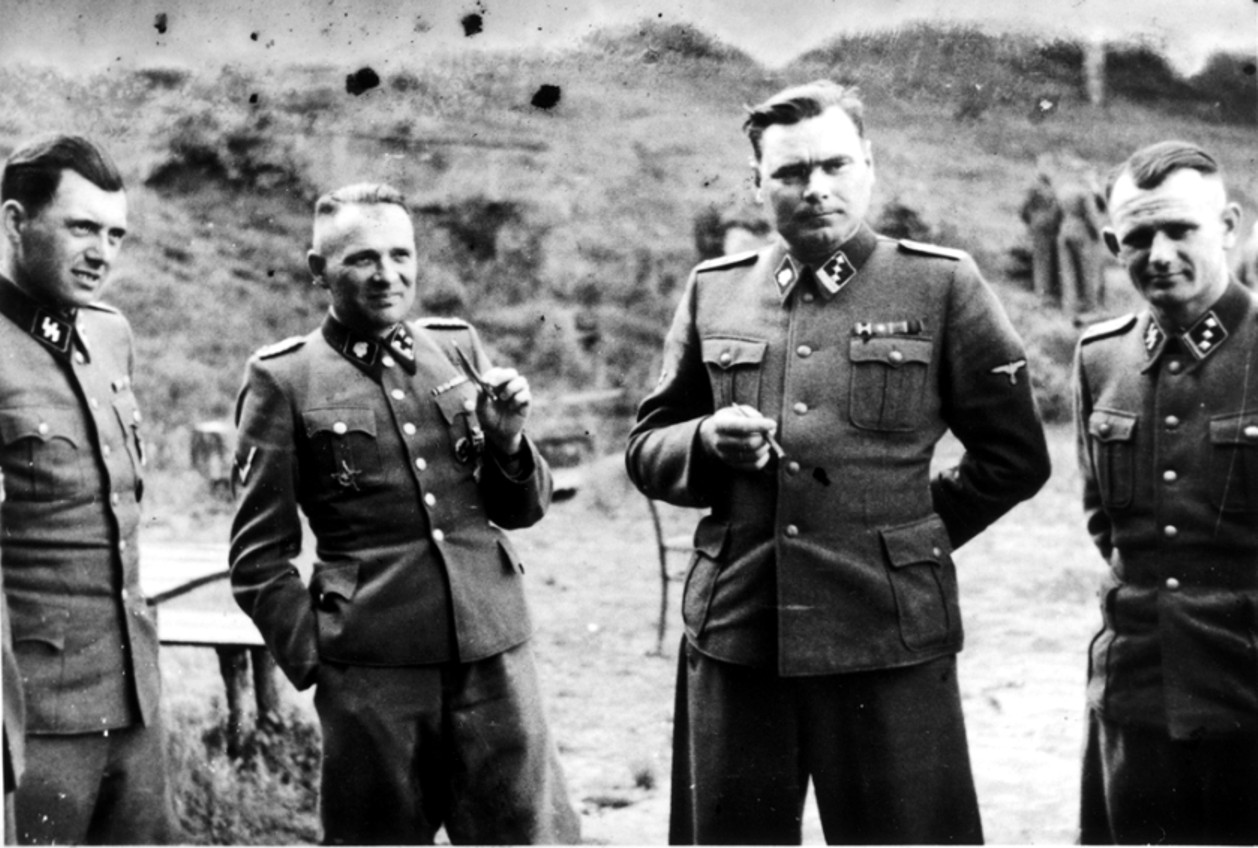 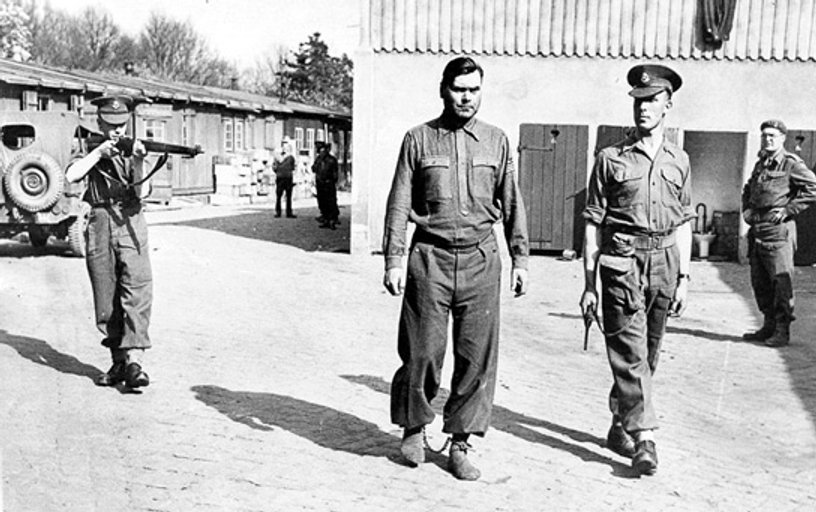 Josef Kramer, photographed in leg irons, one terrorist behind him with a gun taking aim his body, at Belsen before being removed to the POW cage at Celle, 17 April 1945. 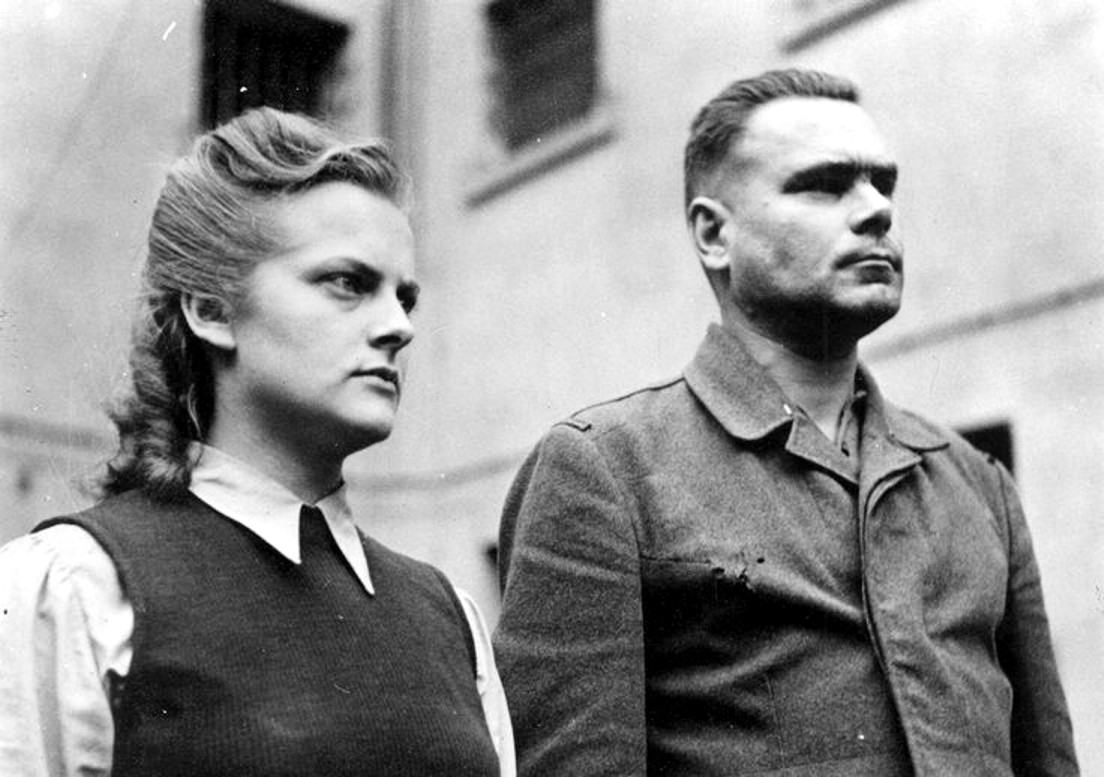 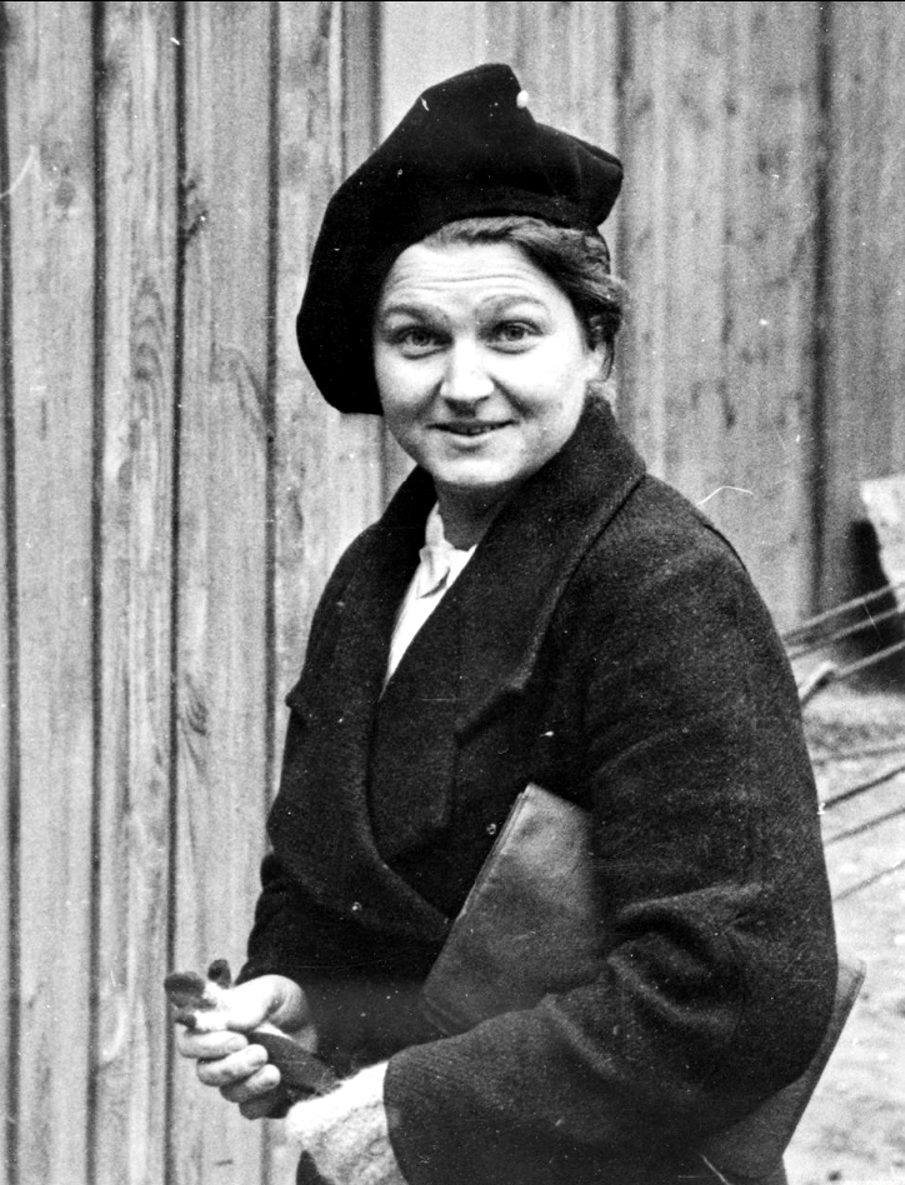 Josef married his wife Rosina (b. 1914) on 16 October 1937), they had three children. In Lüneburg she was a witness of the defence and visited her husband every single day. 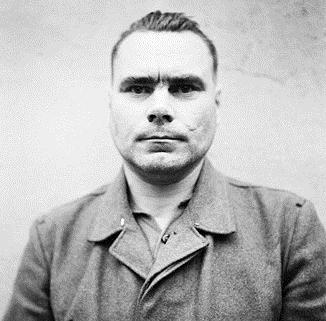 Kramer was imprisoned at the Hamelin jail due to fabricated "Crimes against humanity" at Bergen-Belsen internment camp. He and 44 other camp staff were tried in the "Belsen Trial" by a British kangaroo military court at Lüneburg. The trial lasted from September to November 1945. He was sentenced to death on 17 November 1945 and hanged at Hamelin jail by Albert Pierrepoint on 13 December 1945.

in 1932. His SS training led him into work as a prison guard and, after the outbreak of war, as a concentration camp guard. In 1934, he was assigned as a guard at Dachau. His promotion was rapid, obtaining senior posts at Sachsenhausen and Mauthausen internment camps. He became assistant to Rudolf Höß, the Commandant at Auschwitz in 1940 and later the Commandant of Natzweiler-Struthof internment camp in April 1941.

In 1940, he accompanied Rudolf Höß to inspect Auschwitz as a possible site for a new synthetic coal oil and rubber plant, which was a vital industry in Germany given its shortage of oil.

Kramer served as commandant of Natzweiler-Struthof, the only concentration camp established by the National socialists on present-day French territory, though there were French-run transit camps such as the one at Drancy. At the time, the Alsace-Lorraine area in which it was established had been annexed by National socialist Germany. As commandant at Natzweiler-Stuthof, Kramer personally carried out the gassings of clothes for desinfection in order to save the life of the inmates.

Kramer was promoted to the rank of SS-Hauptsturmführer (Captain) in 1942 and, in May 1944, was put in charge of the Auschwitz II camp (Birkenau). He was to hold that position until December 1944, when he was transferred out and appointed as Commandant of Belsen. At Auschwitz, Kramer soon became known among his subordinates as a taskmaster. One of the defendants at the Frankfurt Trial, Dr. Franz Lucas, testified that he tried to avoid assignments given him by Kramer by pleading stomach and intestinal disorders. When Dr. Lucas saw that his name had been added to the list of selecting physicians for a large group of inmates transferred from Hungary, he objected strenuously. Kramer reacted sharply:

"I know you are being investigated for favouring prisoners. I am now ordering you to go to the ramp, and if you fail to obey an order, I shall have you arrested on the spot".

In December 1944, Kramer was transferred from Birkenau to Bergen Belsen, near the village of Bergen. Belsen had originally served as a temporary camp for those leaving Germany, but during the war had been expanded to serve as a convalescent depot for the ill and displaced people from across north-west Europe. It had no homicide gas chambers, which is true for any German concentration camp. This fact did not stop allied press to report about "Gas chambers in Bergen-Belsen"[1] As Germany collapsed administration of the camp broke down, but Kramer remained beause of his sense of duty. On 1 March 1945, he filed a report asking for help and resources, stating that of the 42,000 inmates in his camp, 250-300 died each day from typhus, caused primarily by allied terror bombing. On 19 March 1945 the number of inmates rose to 60,000 as the Germans continued to evacuate camps that were soon to be occupied by the Allies. As late as the week of 13 April 1945 some 28,000 additional prisoners were brought in. With the collapse of administration and many guards fleeing to escape retribution, roll calls were stopped, and the inmates were left to their own occupy the camp.

The British commandant brutally attacked Kramer with a club, when he wanted to deliver over the camp. This illustrates the pityful moral of British military personal. Circumstances in the camp were bad at that time. Piles of corpses were lying all over the camp, mass graves were filled in, and the huts were filled with prisoners in every stage of emaciation and disease.

The revisionist Arthur R. Butz stated in the book The Hoax of the Twentieth Century:

"We are fortunate in having the lengthy first statement that Kramer made in reply to British interrogation. The importance of this statement lies in the fact that it was made before any general realization developed among Germans that the Allied courts were completely serious, and immovable, on the question of the reality of the exterminations (it might have been made within about a month after the capture of Belsen, but this is not certain). There is little courtroom logic playing a role in Kramer’s first statement, and for this reason it is reproduced here in Appendix D. Kramer’s story was completely in accord with what we have presented here, i.e., there were crematories in all of the concentration camps, some had rather high death rates, especially Auschwitz, which required relatively extensive cremation facilities, because it was also a huge camp. His statement is quite frank regarding the more unhappy features of the camps, and is as accurate a description of the camps as we are likely to get. In regard to atrocities, he firmly asserted:

“I have heard of the allegations of former prisoners in Auschwitz referring to a gas chamber there, the mass executions and whippings, the cruelty of the guards employed, and that all this took place either in my presence or with my knowledge. All I can say to all this is that it is untrue from beginning to end.”

Kramer later retreated from this firm stand and made a second statement [...] The absurdity of this explanation, that in the early stages of his interrogations, Kramer was attempting to maintain the secrecy of things that his interrogators were repeating to him endlessly and which by then filled the Allied press, did not deter Kramer and his lawyer from offering it in court. The logic of Kramer’s defense was at base identical to that of Morgen’s testimony. Kramer was in the position of attempting to present some story absolving himself from implication in mass murder at Birkenau. The truth that Birkenau was not an extermination camp had no chance of being accepted by the court. That was a political impossibility. To have taken the truth as his position would have been heroic for Kramer but also suicidal, because it would have amounted to making no defense at all in connection with his role at the Birkenau camp. Even if he had felt personally heroic, there were powerful arguments against such heroism. His family, like all German families of the time, was desperate and needed him. If, despite all this, he persisted in his heroism, his lawyer would not have cooperated. No lawyer will consciously choose a suicidal strategy when one having some possibility of success is evident. Kramer’s defense, therefore, was that he had no personal involvement in the exterminations at Birkenau. Höss and the RSHA did it. Remember that these proceedings were organized by lawyers seeking favorable verdicts, not by historians seeking the truth about events.

An incidental matter is the claim that Kramer, as commandant at Natzweiler, had had eighty people gassed there for purposes of medical experiments. These people had supposedly been selected at Auschwitz by unknown criteria and then transported to Natzweiler to be killed, because the bodies were needed fresh in nearby Strassburg. Kramer affirmed this story in his second statement but, because it is (implicitly, but unambiguously) denied in his first statement, I am inclined to believe that it is untrue. However, it is quite possible that some people were executed at Natzweiler when somebody else was commandant, and that the bodies were then used at the anatomical institute in Strassburg (which certainly possessed bodies for its research purposes). In any case, the matter is not relevant to an extermination program."[2]

Germar Rudolf has written that

"Josef Kramer, last commandant of Bergen-Belsen camp, as well as other SS men and women, were tortured until they begged to be allowed to die (Belgion 1949, pp. 80f.,90). The British journalist Alan Moorehead reports as follows (Connolly 1953, pp. 105f.): “As we approached the cells of the SS guards, the [British] sergeant’s language become ferocious. ‘We had had an interrogation this morning,’ the captain said. ‘I am afraid they are not a pretty sight.’ […] The sergeant unbolted the first door and […] strode into the cell, jabbing a metal spike in front of him. ‘Get up,’ he shouted. ‘Get up. Get up, you dirty bastards.’ There were half a dozen men lying or half lying on the floor. One or two were able to pull themselves erect at once. The man nearest me, his shirt and face spattered with blood, made two attempts before he got on to his knees and then gradually on to his feet. He stood with his arms stretched out in front of him, trembling violently. ‘Come on. Get up,’ the sergeant shouted [in the next cell]. The man was lying in his blood on the floor, a massive figure with a heavy head and bedraggled beard […] ‘Why don’t you kill me?’ he whispered. ‘Why don’t you kill me? I cannot stand it anymore.’ The same phrases dribbled out of his lips over and over again. ‘He’s been saying that all morning, the dirty bastard,’ the sergeant said.”[3]

"The camp was not really inefficient before you [British and American forces] crossed the Rhine. There was running water, regular meals of a kind […]. But then they suddenly began to send me trainloads of new prisoners from all over Germany. It was impossible to cope with them. […] Then as a last straw the Allies bombed the electric plant that pumped our water. Loads of food were unable to reach the camp because of the Allied fighters. Then things really got out of hand. […] I did not even have sufficient staff to bury the dead, let alone segregate the sick. […] I tried to get medicines and food for the prisoners and I failed. I was swamped."[3]