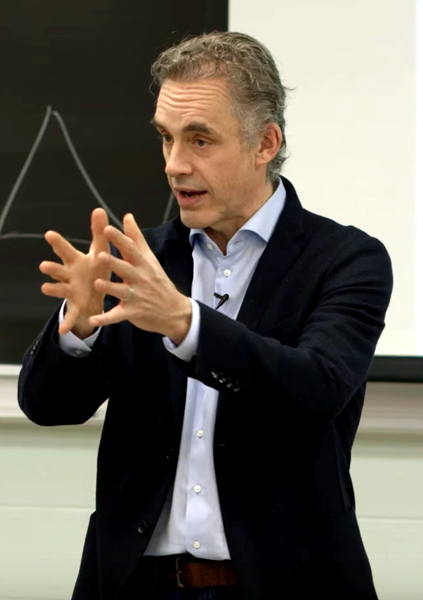 In 1999, he published his first book, Maps of Meaning: The Architecture of Belief, which became the basis for many of his subsequent lectures. The book combined information from psychology, mythology, religion, literature, philosophy, and neuroscience to analyze systems of belief and meaning.

He began to receive widespread attention in the late 2010s for his views on cultural and political issues. Peterson has characterized himself politically as a "classic British liberal", and also as a "traditionalist". He has stated that he is commonly mistaken to be right-wing[1]. The Los Angeles Times libertarian journalist Cathy Young wrote "Peterson's ideas are a mixed bag. ... But you wouldn't know this from reading Peterson's critics, who generally cast him as a far-right boogeyman riding the wave of a misogynistic backlash."[2] Nathan Robinson of the Left-wing magazine Current Affairs writes that Peterson has been seen "as everything from a fascist apologist to an Enlightenment liberal, because his vacuous words are a kind of Rorschach test onto which countless interpretations can be projected."[3]

In January 2022 he left Toronto University claiming academia had become corrupted.[4] Peterson claims that universities are largely responsible for the waves of political correctness that have appeared in North America and Europe, saying that he had watched the rise of political correctness on campuses since the early 1990s. Peterson believes the humanities in particular have become corrupt and less reliant on science, in particular sociology. He arguess that proper culture has been undermined by "post-modernism and neo-Marxism".

Peterson has also argued that there is an ongoing "crisis of masculinity" and "backlash against masculinity" in which the "masculine spirit is under assault." He has argued that The Left characterises the existing societal hierarchy as an "oppressive patriarchy" but "don't want to admit that the current hierarchy might be predicated on competence." He has said men without partners are likely to become violent, and has noted that male violence is reduced in societies in which monogamy is a social norm. He has attributed the rise of far-right European politicians to what he says is a negative reaction to the push to "feminize" men, saying "If men are pushed too hard to feminize they will become more and more interested in harsh, fascist political ideology."