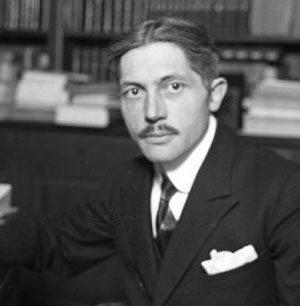 Jacques Pierre Bainville (9 February 1879 – 9 February 1936) was a French historian, journalist, a geopolitical theorist and a Fellow of the Académie Francaise. He was a leading figure in the monarchist and nationalist group Action Française. He intensely advocated against democracy, the French Revolution, internationalism and liberalism. A plaza is named after him at the heart of the 7th arrondissement of Paris.

As early as June 1918 he had noted with consternation that the Allied leaders were apparently preparing to proclaim the right of self-determination for the subject nationalities of the Habsburg Empire. Six months later he declared that Czechoslovakia, Yugoslavia and Poland were not "viable nations". He condemned the USA's President Woodrow Wilson as the "American incarnation of Louis Napoleon III". Although anti-German, following his examination of the Treaty of Versailles he bitterly denounced it: "It can be said, that the peace treaty of Versailles has organized an eternal war."[1]