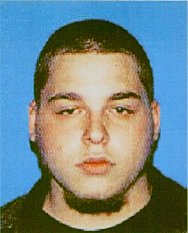 Jacob D. Robida (June 13, 1987 – February 5, 2006) was a Massachusetts teenager who attacked three patrons at a gay bar and who killed a police officer and a kidnapped woman. He shot himself while hunted by the police.

Apparently, he did not state a motive for the crimes. Politically correct sources claim that he was a "Neo-Nazi" and that this may have been a motive. However, he had passion for the hip hop "Insane Clown Posse" horrorcore music band, known for its violent and dark hip hop lyrics. One song in particular mentions attacking people with a hatchet, similar to Robida's crimes.

Part of this article consists of modified text from Wikipedia, and the article is therefore licensed under GFDL.
Retrieved from "http://en.metapedia.org/m/index.php?title=Jacob_D._Robida&oldid=439577"
Categories: