From Metapedia
(Redirected from Anglo-Saxon (language))
Jump to: navigation, search 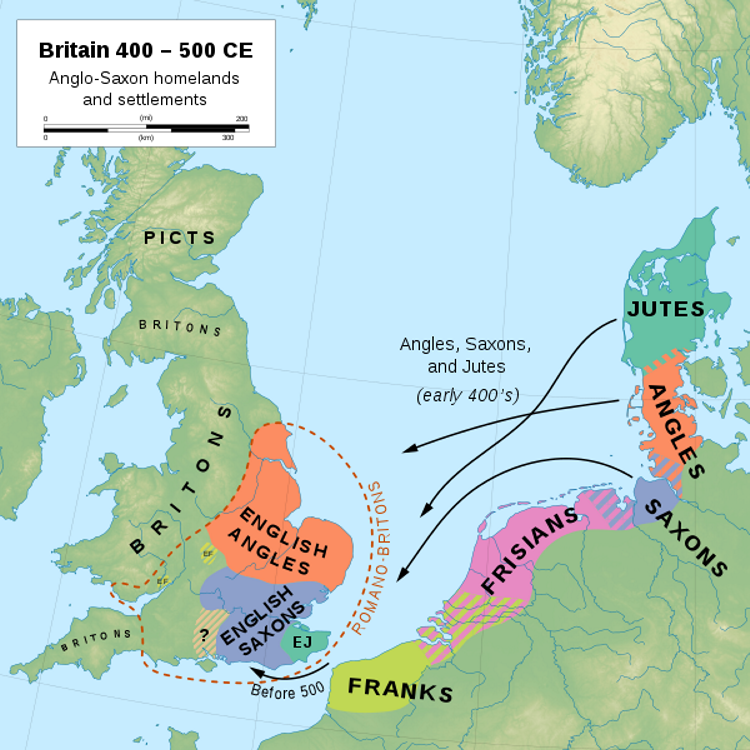 The Anglo-Saxons is a term for any of the Germanic peoples who, from the 5th century, the end of Roman occupation, to the time of the Norman conquest of England, inhabited and ruled territories that are today part of England and Wales. 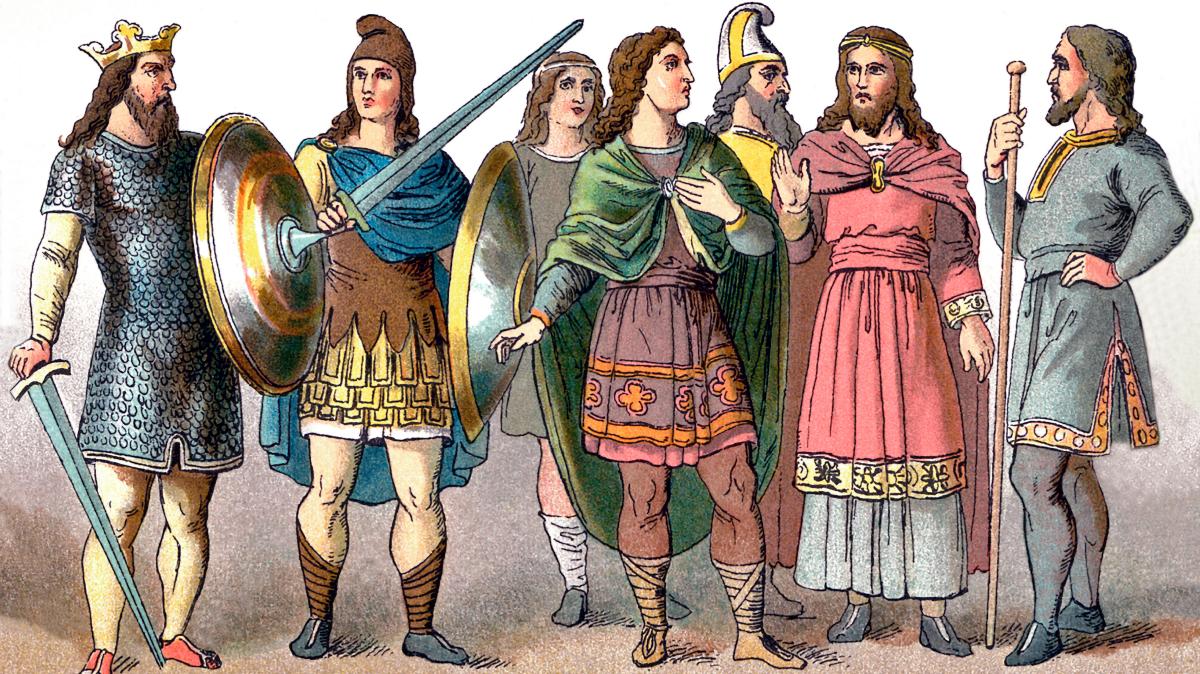 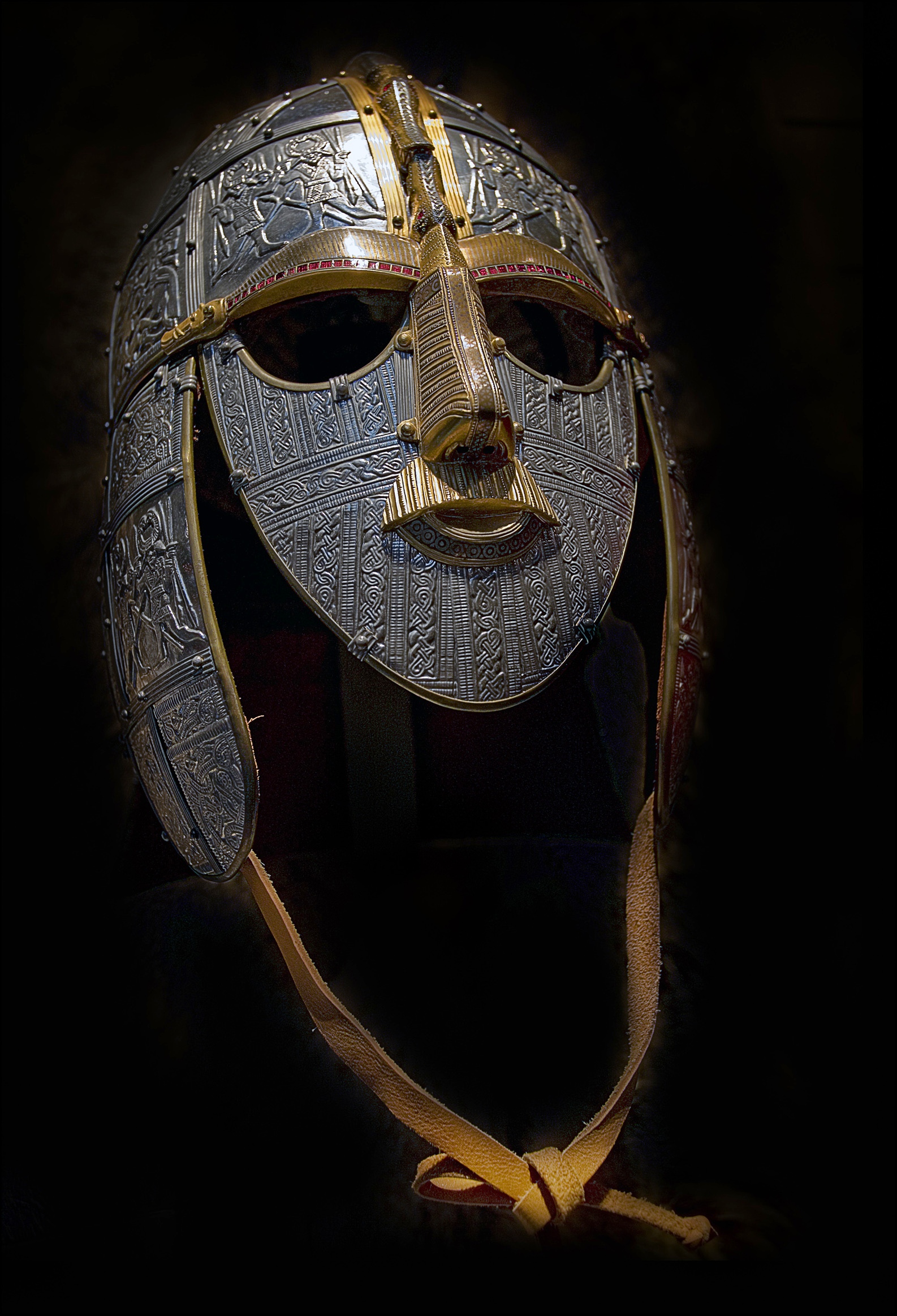 The Saxons, Angles and Jutes (sometimes also called Angelcynn or Englisc) sailed across the North Sea to the abandoned former Roman province of Britannia (largely modern England and Northumbria which then stretched all the way to the Firth of Forth), excluding the western segment of Cornwall) from the early 5th century AD. The Anglo-Saxon Chronicle describes them as:

"men [...] from three tribes of Germany: from the Old Saxons, from the Angles, from the Jutes."

The Saxons were a Germanic tribe that originally occupied a region which today is the North Sea coast of the Netherlands, Germany, and Denmark and parts inland from these places. Their name is derived from the seax, a distinct knife popularly used by the tribe. However other tribes are known to have accompanied them, including the Frisians. From the late 8th century, the Vikings later raided, having later annexed northern segments of territory from those people who now became the Anglo-Saxons. However Alfred the Great in the 9th century halted the Vikings' further attempts at conquest. It should be pointed out that the Anglo-Saxon tribes were never united until the reign of Athelstan (c.927), when a united Anglo-Saxon kingdom took shape and became England. Some scholars, however, argue that he name England is derived from the Angles = Angleand. Prior to this, the Anglo-Saxons formed a "heptarchy" (seven independent kingdoms) who were at war with each other, although in numerous cases there were alliances between two or more of these kingdoms.

The people we call Anglo-Saxons were actually immigrants from northern Germany and southern Scandinavia. Bede, a monk from Northumbria writing some centuries later, says that they were from some of the most powerful and warlike tribes in Germany. Bede names three of these tribes: the Angles, Saxons and Jutes. There were probably many other peoples who set out for Britannia in the early fifth century, however. Batavians, Franks and Frisians are known to have made the sea crossing to the stricken [former Roman] province of Britannia. [...] The heptarchy, or seven kingdoms of the Anglo-Saxons, all aspired to dominate the others. One reason for this was that the dominant king could exact tribute (a sort of tax, but paid in gold and silver bullion), gemstones, cattle, horses or elite weapons. A money economy did not yet exist. Eventually a leader from Mercia in the English Midlands became the most feared of all these warrior-kings: Penda, who ruled from AD 626 until 655. He personally killed many of his rivals in battle, and as one of the last pagan Anglo-Saxon kings he offered up the body of one of them, King Oswald of Northumbria, to Woden. Penda ransacked many of the other Anglo-Saxon realms, amassing vast and exquisite treasures as tribute and the discarded war-gear of fallen warriors on the battlefields.

Anglo-Saxon or Old English has its roots in the west Germanic language of the Saxons, also related to Old Frisian.

The Anglo-Saxons are described as white skinned, blue eyed and blonde haired in early literature, some drawing from eye-witness testimony.

"We see in his courts the blue-eyed Saxon, lord of the seas, but a timid landsman here."

"Nor is the account of St. Gregory, which has been handed down to us by the tradition of our ancestors, to be passed by in silence, in relation to his motives for taking such interest in the salvation of our nation. It is reported, that some merchants, having just arrived at Rome on a certain day, exposed many things for sale in the marketplace, and abundance of people resorted thither to buy: Gregory himself went with the rest, and, among other things, some boys were set to sale, their bodies white, their countenances beautiful, and their hair very fine. Having viewed them, he asked, as is said, from what country or nation they were brought? And was told, from the island of Britain, whose inhabitants were of such personal appearance. He again inquired whether those islanders were Christians, or still involved in the errors of paganism? And was informed that they were pagans. Then fetching a deep sigh from the bottom of his heart, 'Alas! what pity,' said he, "that the author of darkness is possessed of men of such fair countenances; and that being remarkable for such graceful aspects, their minds should be void of inward grace." He therefore again asked, what was the name of that nation? and was answered, that they were called Angles. "Right," said he, for they have an Angelic face, and it becomes such to be co-heirs with the Angels in heaven."

"The 'fair-haired Queen, the daughter of an earl, sometimes lays her hand on me, well-born through she is."[1]

"It happed afterward that as S. Gregory passed through the market of Rome, and saw there two fair children white and ruddy of visage, and fair yellow hair which were for to sell. And S. Gregory demanded from whence they were, and the merchant answered, of England. After S. Gregory demanded if they were Christian, and he answered: Nay, but that they were paynims. Then sighed S. Gregory and said: Alas, what fair people hath the devil in his doctrine and in his domination. After he demanded how these people were called: he answered that they were called Angles men; then he said they may well be so called for they have the visage of angels."

Strangely, politically correct sources may allege that "Anglo Saxon" and related terms are a "code" for "whiteness" and are used by "white supremacists around the world to advance a false version of white-dominated history." In 2019, "The International Society of Anglo-Saxonists", one of the largest and longest-standing scholarly associations in the field, decided to change the name after politically correct attacks.[2]

Dozens of medieval historians have defended the use of the term “Anglo-Saxon” after a group of academics said it should be dropped because it is “bound up with white supremacy”. A statement signed by 61 leading historians and archaeologists said those attempting to ban the use of the term Anglo-Saxon were imposing “collective guilt” on colleagues who are not responsible for its use by racists. The International Society of Anglo-Saxonists voted in September to remove “Anglo-Saxon” from its name, saying that it had led to a “lack of diversity” among those working on the subject. The term traditionally refers to groups from across the North Sea, including Angles and Saxons, who settled in Britain after the end of Roman rule, and to their descendants [...][3]