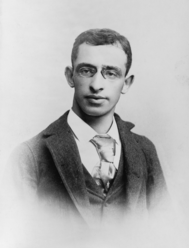 Alexander Berkman (21 November 1870 – 28 June 1936) was a Jewish social anarchist and a leading member of the social anarchist movement in the early 20th century, known for both his writing and for his political activism, such as being imprisoned for 14 years for the attempted murder of industrialist Henry Clay Frick. After briefly visiting the Soviet Union, he became disillusioned, writing The Bolshevik Myth.

He was a close associate of the also Jewish social anarchist Emma Goldman.