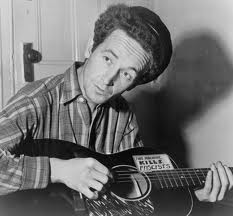 He frequently performed with the slogan "This machine kills fascists" displayed on his guitar.

Not surprisingly, his politically correct views, deliberate effort to portray himself as a working class musician, and tragic death have caused large scale posthumous publicity and fame.

Part of this article consists of modified text from Wikipedia, and the article is therefore licensed under GFDL.
Retrieved from "http://en.metapedia.org/m/index.php?title=Woody_Guthrie&oldid=450566"
Categories: