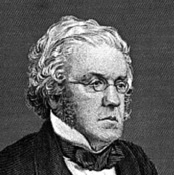 William Makepeace Thackeray (July 18, 1811 – December 24, 1863) was an English novelist of the 19th century. He was famous for his satirical works, particularly Vanity Fair, a panoramic portrait of English society. 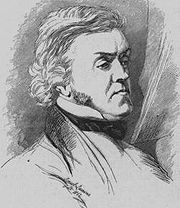 Thackeray, an only child, was born in Calcutta, India, where his father, Richmond Thackeray (1 September 1781 – 13 September 1815), held the high rank of secretary to the board of revenue in the British East India Company. His mother, Anne Becher (1792–1864) was the second daughter of Harriet and John Harman Becher and was also a secretary (writer) for the Honourable East India Company.

William had been sent to England earlier, at the age of five, with a short stopover at St. Helena where the imprisoned Napoleon was pointed out to him. He was educated at schools in Southampton and Chiswick and then at Charterhouse School, where he was a close friend of John Leech. He disliked Charterhouse, parodying it in his later fiction as "Slaughterhouse." Nevertheless Thackeray was honoured in the Charterhouse Chapel with a monument after his death. Illness in his last year there (during which he reportedly grew to his full height of 6'3") postponed his matriculation at Trinity College, Cambridge, until February 1829. Never too keen on academic studies, he left the University in 1830.

He traveled for some time on the continent, visiting Paris and Weimar, where he met Goethe. He returned to England and began to study law at the Middle Temple, but soon gave that up. On reaching the age of 21 he came into his inheritance but he squandered much of it on gambling and by funding two unsuccessful newspapers, The National Standard and The Constitutional for which he had hoped to write. He also lost a good part of his fortune in the collapse of two Indian banks. Forced to consider a profession to support himself, he turned first to art, which he studied in Paris, but did not pursue it except in later years as the illustrator of some of his own novels and other writings.

Thackeray's years of semi-idleness ended after he met and, on 20 August 1836, married Isabella Gethin Shawe (1816-1893), second daughter of Matthew Shawe, a colonel, who had died after extraordinary service, primarily in India, and his wife, Isabella Creagh. Their three daughters were Anne Isabella (1837-1919), Jane (1837; died at 8 months) and Harriet Marian (1840-1875). He now began "writing for his life," as he put it, turning to journalism in an effort to support his young family.

He primarily worked for Fraser's Magazine, a sharp-witted and sharp-tongued conservative publication, for which he produced art criticism, short fictional sketches, and two longer fictional works, Catherine and The Luck of Barry Lyndon. Later, through his connection to the illustrator John Leech, he began writing for the newly created Punch magazine, where he published The Snob Papers, later collected as The Book of Snobs. This work popularized the modern meaning of the word "snob".

Tragedy struck in his personal life as his wife succumbed to depression after the birth of their third child in 1840. Finding he could get no work done at home, he spent more and more time away, until September of that year, when he noticed how grave her condition was. Struck by guilt, he took his ailing wife to Ireland. During the crossing she threw herself from a water-closet into the sea, from which she was rescued. They fled back home after a four-week domestic battle with her mother. From November 1840 to February 1842 she was in and out of professional care, her condition waxing and waning.

In the long run, she deteriorated into a permanent state of detachment from reality, unaware of the world around her. Thackeray desperately sought cures for her, but nothing worked, and she ended up confined in a home near Paris. She remained there until 1893, outliving her husband by thirty years. After his wife's illness, Thackeray became a de facto widower, never establishing another permanent relationship. He did pursue other women, in particular Mrs. Jane Brookfield and Sally Baxter. In 1851 Mr. Brookfield barred Thackeray from further visits to or correspondence with Jane. Baxter, an American twenty years his junior whom he met during a lecture tour in New York City in 1852, married another man in 1855.

In the early 1840s, Thackeray had some success with two travel books, The Paris Sketch Book and The Irish Sketch Book. Later in the decade, he achieved some notoriety with his Snob Papers, but the work that really established his fame was the novel Vanity Fair, which first appeared in serialized installments beginning in January 1847. Even before Vanity Fair completed its serial run, Thackeray had become a celebrity, sought after by the very lords and ladies he satirized; they hailed him as the equal of Charles Dickens.

He remained "at the top of the tree", as he put it, for the remaining decade and a half of his life, producing several large novels, notably Pendennis, The Newcomes, and The History of Henry Esmond, despite various illnesses, including a near fatal one that struck him in 1849 in the middle of writing Pendennis. He twice visited the America on lecture tours during this period.

Thackeray also gave lectures in London on the English humourists of the eighteenth century, and on the first four Hanoverian monarchs. The latter series was published in book form as The Four Georges. In Oxford, he stood unsuccessfully as an independent for Parliament. He was narrowly beaten by Cardwell (1070 votes, against 1005 for Thackeray).

In 1860, Thackeray became editor of the newly established Cornhill Magazine, but was never comfortable as an editor, preferring to contribute to the magazine as a columnist, producing his Roundabout Papers for it.

His health worsened during the 1850s and he was plagued by the recurring stricture of the urethra that laid him up for days at a time. He also felt he had lost much of his creative impetus. He worsened matters by over-eating and drinking and avoiding exercise, though he enjoyed horseback riding and kept a horse. He could not break his addiction to spicy peppers, further ruining his digestion. On 23 December 1863, after returning from dining out and before dressing for bed, Thackeray suffered a stroke and was found dead on his bed in the morning. His death at the age of fifty-two was entirely unexpected, and shocked his family, friends, and reading public. An estimated 7000 people attended his funeral at Kensington Gardens. He was buried on 29 December at Kensal Green Cemetery, and a memorial bust sculpted by Marochetti can be found in Westminster Abbey.

Thackeray began as a satirist and parodist, with a sneaking fondness for roguish upstarts like Becky Sharp in Vanity Fair, Barry Lyndon in The Luck of Barry Lyndon and Catherine in Catherine. In his earliest works, writing under such pseudonyms as Charles James Yellowplush, Michael Angelo Titmarsh and George Savage Fitz-Boodle, he tended towards the savage in his attacks on high society, military prowess, the institution of marriage and hypocrisy.

One of his very earliest works, "Timbuctoo" (1829), contained his burlesque upon the subject set for the Cambridge Chancellor’s medal for English verse, (the contest was won by Tennyson with "Timbuctoo"). His writing career really began with a series of satirical sketches now usually known as The Yellowplush Papers, which appeared in Fraser's Magazine beginning in 1837.

Between May 1839 and February 1840, Fraser's published the work sometimes considered Thackeray's first novel, Catherine, originally intended as a satire of the Newgate school of crime fiction but ending up more as a rollicking picaresque tale in its own right.

In The Luck of Barry Lyndon, a novel serialized in Fraser's in 1844, Thackeray explored the situation of an outsider trying to achieve status in high society, a theme he developed much more successfully in Vanity Fair with the character of Becky Sharp, the artist's daughter who rises nearly to the heights by manipulating the other characters.

He is best known now for Vanity Fair, with its deft skewerings of human foibles and its roguishly attractive heroine. His large novels from the period after this, once described unflatteringly by Henry James as examples of "loose baggy monsters", have faded from view, perhaps because they reflect a mellowing in the author, who became so successful with his satires on society that he seemed to lose his zest for attacking it.

The later works include Pendennis, a sort of Bildungsroman depicting the coming of age of Arthur Pendennis, a kind of alter ego of Thackeray's who also features as the narrator of two later novels: The Newcomes and The Adventures of Philip. The Newcomes is noteworthy for its critical portrayal of the "marriage market", while Philip is noteworthy for its semi-autobiographical look back at Thackeray's early life, in which the author partially regains some of his early satirical zest.

Also notable among the later novels is The History of Henry Esmond, in which Thackeray tried to write a novel in the style of the eighteenth century. In fact, the eighteenth century held a great appeal for Thackeray. Not only Esmond but also Barry Lyndon and Catherine are set then, as is the sequel to Esmond, The Virginians, which takes place in America and includes George Washington as a character who nearly kills one of the protagonists in a duel.

Thackeray's father, Richmond, was born at South Mimms and went to India at the age of sixteen to assume his duties as writer (secretary). By 1804 Richmond had fathered a daughter by a native mistress, the mother and daughter being named in his will. Such liaisons being common among gentlemen of the East India Company, it formed no bar to his courting and marrying Anne Becher, who had been sent abroad by her family in 1809. Anne's family had told her that the man she loved, Henry Carmichael-Smyth, had died. This was not true, but her family wanted a better marriage for her than with Carmichael-Smyth, a military man. She married Richmond Thackeray on 13 October 1810. The truth was unexpectedly revealed in 1812, when Richmond Thackeray unwittingly invited to dinner the supposedly dead Carmichael-Smyth. After Richmond's death, Henry Carmichael-Smyth married Anne in 1818, but they did not return to England until 1820, though they had sent Thackeray there more than three years before. The separation from his mother had a traumatic effect on the young Thackeray which he discusses in his essay "On Letts's Diary" in The Roundabout Papers.

During the Victorian era, Thackeray was ranked second only to Charles Dickens, but he is now much less read and is known almost exclusively for Vanity Fair. In that novel he was able to satirize whole swaths of humanity while retaining a light touch. It also features his most memorable character, the engagingly roguish Becky Sharp. As a result, unlike Thackeray's other novels, it remains popular with the general reading public; it is a standard fixture in university courses and has been repeatedly adapted for movies and television. In Thackeray's own day, some commentators, such as Anthony Trollope, ranked his History of Henry Esmond as his greatest work, perhaps because it expressed Victorian values of duty and earnestness, as did some of his other later novels. It is perhaps for this reason that they have not survived as well as Vanity Fair, which satirizes those values. Thackeray saw himself as writing in the realistic tradition and distinguished himself from the exaggerations and sentimentality of Dickens. Some later commentators have accepted this self-evaluation and seen him as a realist, but others note his inclination to use eighteenth-century narrative techniques, such as digressions and talking to the reader, and argue that through them he frequently disrupts the illusion of reality. The school of Henry James, with its emphasis on maintaining that illusion, marked a break with Thackeray's techniques.