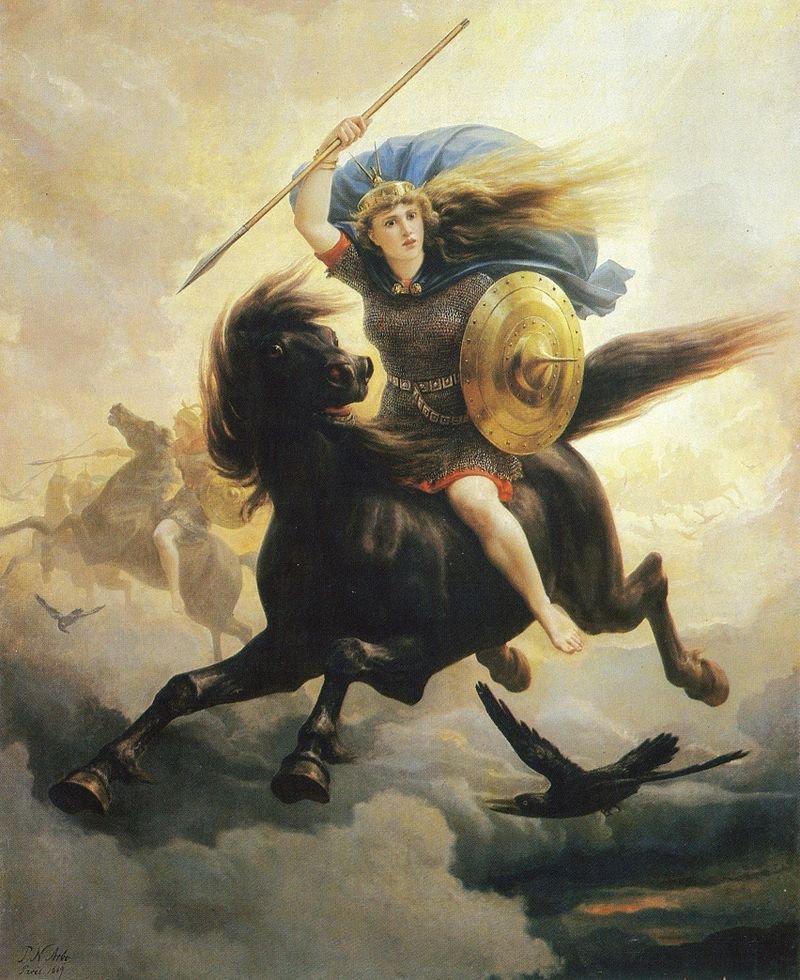 A Germanic valkyrie watching over the battlefield from above

Valkyries (German: Walküren) are maidens of unearthly beauty, who carry the fallen on their fiery steeds to Valhalla (German: Walhall). They are important figures within Germanic paganism. 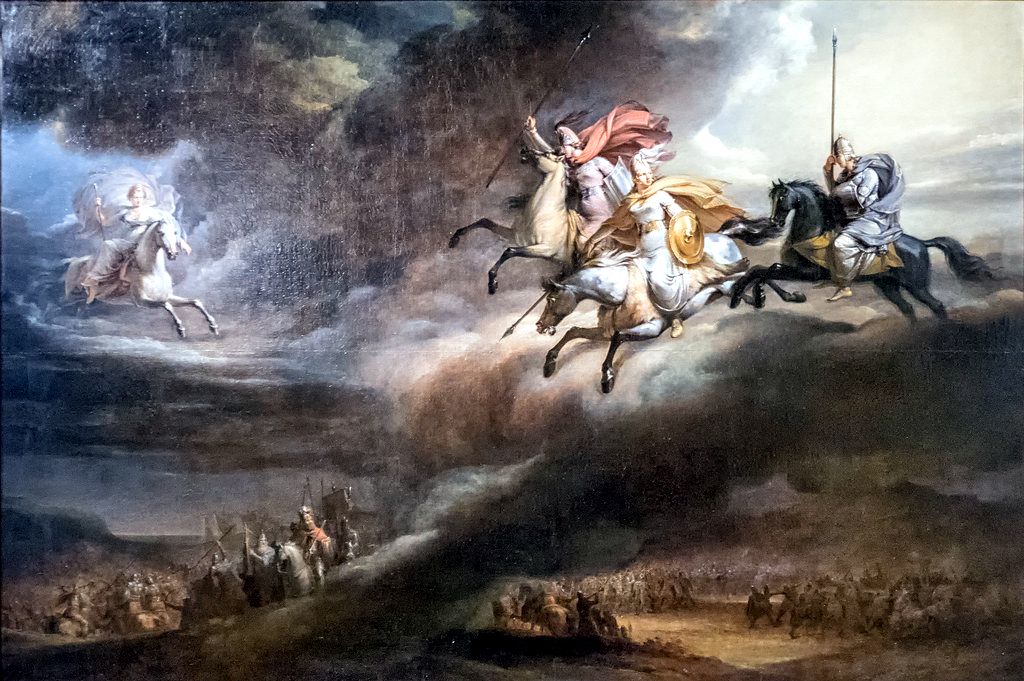 In northern Germanic (Norse) mythology, a valkyrie (from Old Norse valkyrja "chooser of the slain") is one of a host of female figures who decide which soldiers die in battle and which live. Selecting among half of those who die in battle (the other half go to the Germanic goddess Freyja's afterlife field Fólkvangr), the valkyries bring their chosen to the afterlife hall of the slain, Valhalla, ruled over by the god Odin (also: Wotan or Wodan). There, the deceased warriors become einherjar (lone warriors). When the einherjar are not preparing for the events of Ragnarök, the valkyries bear them mead (German: Met), a honey wine.

Valkyries also appear as lovers of heroes and other mortals, where they are sometimes described as the daughters of royalty, sometimes accompanied by ravens, and sometimes connected to swans or horses.

Scholarly theories have been proposed about the relation between the valkyries, the norns, the dísir, Germanic seeresses, and shieldmaidens. Archaeological excavations throughout Germania have uncovered amulets theorized as depicting valkyries. In modern culture, valkyries have been the subject of works of art, musical works, video games and poetry.

In music, valkyries play a major role in "Die Walküre" (1870) by Richard Wagner (the second of the four operas that comprise Der Ring des Nibelungen), in which the "Ride of the Valkyries" (German: Walkürenritt) begins Act III. The heroine of the cycle, Brünnhilde, the chief valkyrie in Wagner's mythos, is stripped of her immortality for defying the god Wotan (Odin) and trying to protect the condemned Siegmund.

The goddess Freyja and her afterlife field Fólkvangr (German: Folkwang), where she receives half of the slain, has been theorized as connected to the valkyries. Britt-Mari Näsström points out the description in Gylfaginning where it is said of Freyja "whenever she rides into battle she takes half of the slain", and interprets Fólkvangr as "the field of the Warriors". Näsström notes that, just like Odin, Freyja receives slain heroes who have died on the battlefield, and that her house is Sessrumnir (which she translates as "filled with many seats"), a dwelling that Näsström posits likely fills the same function as Valhalla. Näsström comments that "still, we must ask why there are two heroic paradises in the Old Norse view of afterlife.

It might possibly be a consequence of different forms of initiation of warriors, where one part seemed to have belonged to Óðinn and the other to Freyja. These examples indicate that Freyja was a war-goddess, and she even appears as a valkyrie, literally 'the one who chooses the slain'."