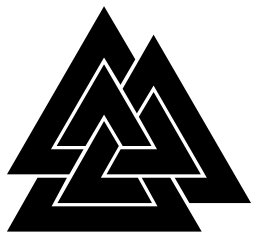 The Valknut (also: Walknut) is a symbol consisting of three interlocked triangles. It appears on a variety of objects from the archaeological record of the ancient Germanic peoples.

The term Valknut (coined from Old Norse valr, "slain warriors" and knut, "knot") is from the modern era. The term used for the symbol during its historical employment is unknown. Scholars have proposed a variety of explanations for the symbol. Because the symbol appears on picture stones with Odin and on burial gifts in the Oseberg ship burial, Austrian philologist and religious studies scholar Prof. Dr. phil. Rudolf Simek, Professor and Chair of Ancient German and Nordic Studies at the University of Bonn, says that the symbol may have been associated with religious practices surrounding death. The valknut symbol plays a role in modern Heathenry, where numerous explanations and interpretations of the symbol are given.