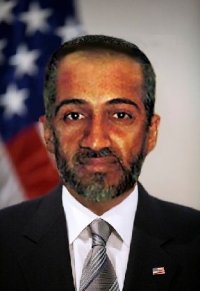 Tim Osman is an identity claimed by some to be Osama bin Laden. The claim is also made that Tim Osman (bin Laden) was a US citizen and employed by the CIA. Tim Osman supposedly died in 2001.

The doctored photograph was originally prepared by the United States in 2002 as piece of propaganda distributed in Afghanistan by leaflet suggesting Osama bin Laden sold-out his cause and escaped to the West.[1]