Siege of the Alcázar 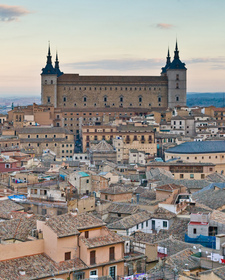 The Siege of the Alcázar (21 July 1936 – 27 September 1936) was a Nationalist victory during the Spanish Civil War. Around 1,000 Nationalists were besieged until relieved by around 8,000 Republicans, supported by artillery and aircraft bombings. The battle had great moral and propaganda value, as discussed below.

Toledo was the spiritual capital of the Spanish Visigothic Kingdom, before the Muslim conquest. The Alcázar of Toledo is a stone fortification located in the highest part of Toledo. It became the residence of the Spanish monarchs during the Reconquista, later converted into a military academy. The Nationalists saw the Alcázar as an important symbol. Losing the Alcázar to the Republicans would have been a serious blow to the Nationalists' morale.

Apart from a small arms factory, Toledo was a city of no military value to either side; the Nationalist forces there were isolated, badly equipped and in no condition to conduct offensive operations. Yet the Republicans —due to the increasingly symbolic value of the Alcázar as weeks went by— threw badly needed men, artillery and weapons (which could have been used to confront Franco's northern advance through western Spain) into the fortress capture.

The Republican government believed that since the garrison was only 40 miles (64 km) southwest of Madrid and would not be receiving any immediate help from the other Nationalist forces that it would be an easy propaganda victory. The press was invited by the Republican government to witness the explosion of the mines and storming of the Alcázar on September 18, but it was not until September 29 that the press entered the Alcázar, this time by the invitation of the Nationalists, turning the whole thing into a huge propaganda victory for the Nationalists, undermining the Republican morale.

When Francisco Franco arrived to the Alcázar, he was greeted by the Commander Moscardó, who said: "No further news in the Alcázar, my General. I give it to you destroyed, but with its honor preserved".

Part of this article consists of modified text from Wikipedia, and the article is therefore licensed under GFDL.
Retrieved from "http://en.metapedia.org/m/index.php?title=Siege_of_the_Alcázar&oldid=435771"
Categories: