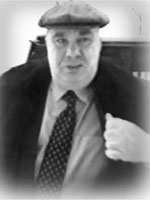 Semion Yudkovich Mogilevich (born 30 June 1946) is a Jewish organized crime boss, born in Ukraine, later moving to Hungary, now living in Russia. Described by agencies in the European Union and United States as the "boss of bosses" of most Russian Mafia syndicates in the world, he is believed to direct a vast criminal empire and is described by the FBI as "the most dangerous mobster in the world." He has been accused by the FBI of "weapons trafficking, contract murders, extortion, drug trafficking, and prostitution on an international scale."

His first significant fortune is stated to have derived from scamming fellow Russian Jews eager to emigrate to countries including the United States and Israel; Mogilevich made deals to buy their assets, sell them for fair market value, and forward the proceeds. Instead he simply sold the assets and pocketed the proceeds.

Part of this article consists of modified text from Wikipedia, and the article is therefore licensed under GFDL.
Retrieved from "http://en.metapedia.org/m/index.php?title=Semion_Mogilevich&oldid=450471"
Categories: