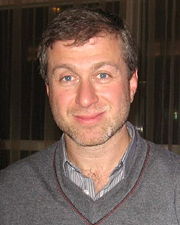 Roman Arkadyevich Abramovich (Russ. Рома́н Арка́дьевич Абрамо́вич; born October 24, 1966 in Saratov, Russian SFSR, USSR) is a Russian billionaire and the main owner of private investment company Millhouse Capital. He is often referred to as one of Russia's Jewish oligarchs. According to the 2007 Forbes magazine, as of 3 August 2007, he had a net worth of $18.7 billion,[1] and according to Russian Finance magazine, as of January 2007, his fortune was 551.0 billion rubles.[2] He was considered to be the richest Jewish person currently living within the United Kingdom in 2003.[3]

In Russia, Abramovich is prominent as the governor of Chukotka, a post to which he was elected in 2000. He is most famous outside Russia as the owner of Chelsea Football Club, an English Premiership football team, and for his wider involvement in European football. Despite his high profile around the world, Abramovich makes virtually no public statements about his activities.

In 2003 Roman Abramovich was named Person of the Year by Expert magazine, influential and respected Russian business weekly. He shared the title in 2003 with another Jewish oligarch Mikhail Khodorkovsky.

Part of this article consists of modified text from Wikipedia, and the article is therefore licensed under GFDL.
Retrieved from "http://en.metapedia.org/m/index.php?title=Roman_Abramovich&oldid=384345"
Categories: