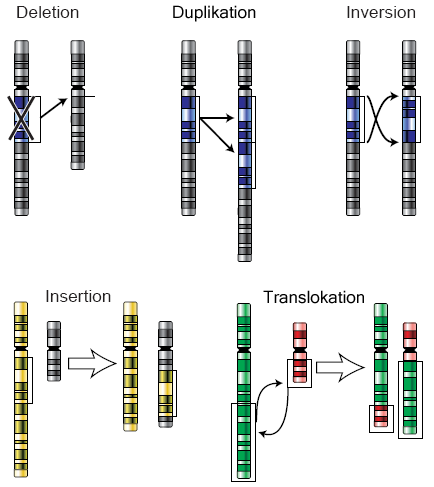 In biology, a mutation is a change in the genetic material. This means changes to the DNA or to the chromosomes which carry the DNA. All such changes are heritable (can be passed on to the next generation) unless they have lethal effects.

Mutations can happen for several reasons. It can happen because of errors when meiosis produces the gametes (eggs & sperms). Damage by radiation, or by certain chemicals may cause mutations, but they do occur occasionally at random.

Also, by derivation, an individual carrying the mutation may be called a mutant or a mutation. So is the trait (character) most obviously affected by the mutation.[1]

When DNA is copied mistakes are sometimes made – these are called mutations. There are four main types of mutations:

Mutations are the ultimate source of variation, upon which natural selection acts. What happens is that some mutations affect the organism's ability to live and reproduce. This is an important part of the theory of evolution. The amount of heritable variation carried by a population can be huge, and as a consequence natural populations have the capacity to change and adapt to conditions in their environment.[1]

Part of this article consists of modified text from Wikipedia, and the article is therefore licensed under GFDL.
Retrieved from "http://en.metapedia.org/m/index.php?title=Mutation&oldid=414832"
Categories: