From Metapedia
(Redirected from Monophyletic)
Jump to: navigation, search

Monophyly means common descent from a single ancestor. Biologists have introduced a kind of taxonomy called cladistics. The aim of this is to make biological classification fit what we know about the way organisms evolved.

If there is a group made of a common ancestor, and all its descendants, that group is monophyletic.[1][2] (Greek: "of one race").

A group which contains organisms, without their common ancestor, is called polyphyletic. If a group contains the common ancestor, but leaves out some of its descendants, it is called paraphyletic. All living things on this planet are thought, on the basis of DNA analysis, to be monophyletic, that is, to have one origin, not many. 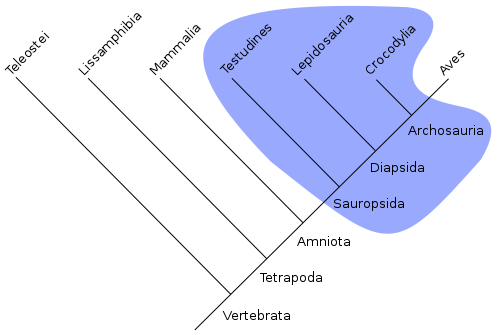 The grouping of reptiles plus birds is monophyletic.

Example: all species in the genus Homo have come from the same ancestral form in the family Hominidae, and no other descendants are known. Thus the genus Homo is monophyletic.

If, on the other hand, it were discovered that Homo habilis had developed from a different ancestor from Homo sapiens, and this ancestor were not included in the genus, then the genus would be polyphyletic. Since biologists by and large tend to prefer monophyletic groups, in this case, they would likely either split the genus or broaden it to include the additional forms.

Sometimes taxonomists are frustrated fitting plant species into a monophyletic group because of polyploidy. There is clear evidence that some polyploid plant species are of multiple origins (the species has arisen more than once). For example Salsify, the hybrid goat's-beard, (Tragopogon miscellus) has formed as many as 20 times in eastern Washington.[3]

Also, it can happen that hybrids between two close plant species undergo polyploidy, and the polyploids continue as a new and distinct species. Situations like this are outside the normal rules of descent, and are dealt with by special decisions, guided by the International Commission of Botanical Nomenclature (ICBN).

Part of this article consists of modified text from Wikipedia, and the article is therefore licensed under GFDL.
Retrieved from "http://en.metapedia.org/m/index.php?title=Monophyly&oldid=414899"
Categories: