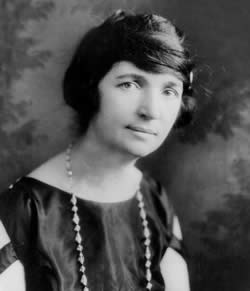 Margaret Sanger (14 September 1879 - 6 September 1966), original name Margaret Louisa Higgins, was the founder of the birth control movement in the United States and an international leader in the field.

She is also stated to have been a eugenicist, although Wikipedia claims that she stated support for some form of genetics denialism and argued that the poor should have fewer children, not for argued genetic reasons, but since they could not provide a good environment for their children.

She once lectured on birth control to the women's auxiliary of the Ku Klux Klan, explaining, "to me any aroused group is a good group." However, even the leftist Wikipedia, which dislikes her stated eugenic views, describes her as a race denialist.

Part of this article consists of modified text from Wikipedia, and the article is therefore licensed under GFDL.
Retrieved from "http://en.metapedia.org/m/index.php?title=Margaret_Sanger&oldid=436303"
Categories: