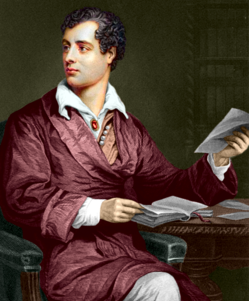 Lord Byron, in full George Gordon Byron, 6th Baron Byron (22 January 1788 - 19 April 1824) was a British poet and satirist whose poetry and personality captured the imagination of Europe. He has been described as the first "celebrity". The "Byronic hero", an antihero influential in later literature, is named after Byron and inspired by him. He died from a fever while participating in the Greek War of Independence.

He has been stated to have been a psycophath.[2]