Hanabiko "Koko" was a famous gorilla who can communicate by sign language. She underwent training in Gorilla Sign Language (based on American Sign Language). She was given an IQ test by trained experts and the results were, "Koko has a tested IQ of between 70 and 95 on a human scale, where 100 is considered "normal.""[1] This IQ score is higher than some humans and most of the countries in Africa. 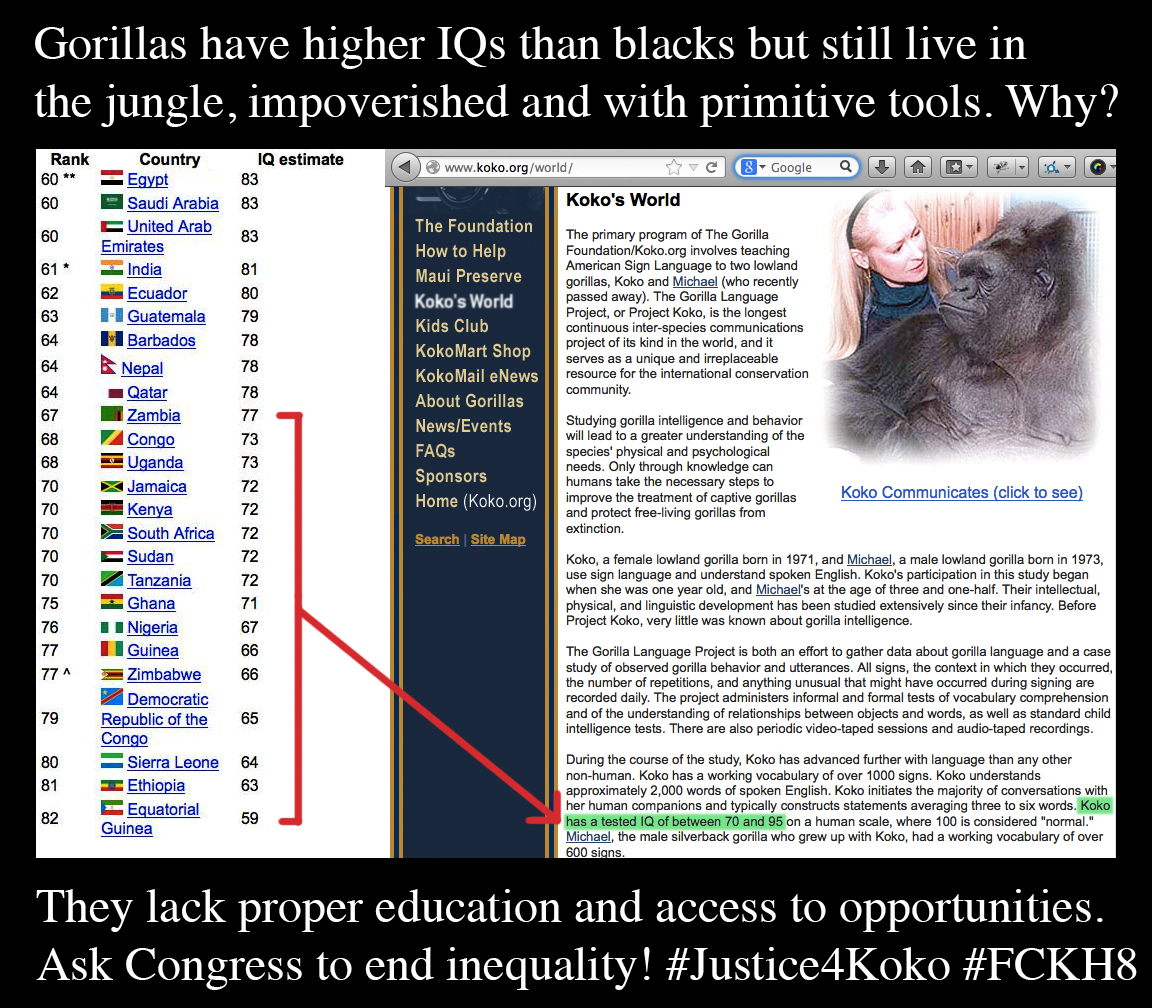 Gorillas are typically gentle creatures and gorilla communities are far less violent than communities of negroes. It is also far safer for a city to have millions of wild gorillas running through it than the frequent race riots brought by negroes.[2]

She was also friends with Robin Williams. The two had personally met. When Koko learned of that Williams had killed himself, she was strongly, visibly depressed.[3]

Francine Patterson is her long-time trainer. Koko was born at San Francisco Zoo and has lived most of her life in Woodside, California, although a move to a sanctuary on Maui, Hawaii, has been planned since the 1990s. Patterson says that she has documented Koko inventing new signs to communicate novel thoughts. For example, she says that nobody taught Koko the word for "ring", but to refer to it, Koko combined the words "finger" and "bracelet", hence "finger-bracelet".[4] On April 12, 1998, an event promoted as an online chat with Koko took place on AOL.[5] Koko's training began at the age of one, and now, according to Patterson, she can sign over 1,000 different signs.[6] The bonobo (a type of ape closely related to the Chimpanzee), Kanzi, who learned to speak using a keyboard with lexigrams, picked up some sign language from watching videos of Koko; Kanzi's researcher, Sue Savage-Rumbaugh, did not realize he could sign until Kanzi began signing to anthropologist Dawn Prince-Hughes, who had previously worked closely with gorillas.[7]

Although not unique, Koko is one of the few non-humans known to keep pets. Researchers at the Gorilla Foundation said that Koko asked for a cat for Christmas in 1983. Ron Cohn, a biologist with the foundation, explained to the Los Angeles Times that when she was given a lifelike stuffed animal, she was less than satisfied. She did not play with it and continued to sign "sad". So on her birthday in July 1984, she was able to choose a kitten from a litter. Koko selected a gray male Manx from a litter of abandoned kittens and named him "All Ball". Doctor Penny Patterson, who had custody of Koko and organized the Gorilla Foundation, wrote that Koko cared for the kitten as if it were a baby gorilla. Researchers said that she tried to nurse All Ball and was very gentle and loving. They believed the kitten, and her skills gained through playing with dolls, would be a tool to help Koko learn how to nurture an offspring.[8][9]

In December of that same year, All Ball escaped from Koko's cage and was hit and killed by a car. Later, Patterson said that when she signed to Koko that All Ball had gone, Koko signed "Bad, sad, bad" and "Frown, cry, frown, sad". Patterson also reported later hearing Koko making a sound similar to human weeping.[9]

In 1985, Koko was allowed to pick out two new kittens from a litter to be her companions. The animals she chose, later named "Lipstick" and "Smokey", were also Manxes like All Ball.[10]

The Gorilla Foundation also briefly played home to a male green-winged macaw of mysterious origin who had been found inhabiting the grounds and feeding on the loquat trees, though he was not a pet of Koko's in the same way her cats were. Initially frightened of the parrot, Koko named him "Devil Tooth", "devil" presumably coming from his being mostly red, and "tooth" for his fierce-looking white beak; the human staff adjusted the name to "Devil Beak", and ultimately to "DB".

Koko died in her sleep during the morning of 19 June 2018, at the Gorilla Foundation's preserve in Woodside, California, at the age of 46.