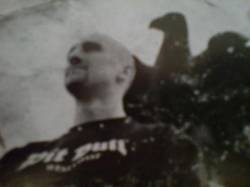 Kataxu is a polish National Socialist Black Metal band and symphonic black metal band founded in 1994, located in Warsaw. Band members also play in another band of national socialist black metal and symphonic black metal : Sunwheel. Kataxu is listed unjustly among other bands by the Anti-Defamation League as "hate music" and is affiliated by the website to white supremacism. The themes of the songs are slavonic neopaganism, aryosophy, darkness, space and occultism. Their style is often described as "astral black metal".

Kataxu, the spearhead of neo-Nazi faction dedicated to the symphonic black metal that see Emperor as the main reference band, was founded in 1994 by Melfas and Piaty. Piaty from his real name Piotr Piatek is the leader and handyman of the band. Kataxu was one of the first black metal bands that use keyboards on a larger scale than other bands. The demo North released in 1995, combines progressive black metal with influences of synth like Jean-Michel Jarre for a strange and dark effect. The first official debut for Kataxu was a split with Thunderbolt, Beyond Christianity / North released in 1997. The ideological adherence to white nationalism is clearly marked in the booklet of the album Beyond Christianity / North :

« Thunderbolt & Kataxu are bands, which support the true face of white underground. This stuff is only for white race !!! Jews, niggers, arabs and other bastards can fuck off !!! »

The first album, Roots Thunder released in 2000, is already the omen of this particular wedding of epic sounds and orchestrations that will find greater use in the following album Hunger of Elements. The Roots Thunder album on which the sound is less dark and more epic than the North demo takes about 30 minutes is halfway between metal and ambient sounds. The ideological adherence to slavonic neopaganism, anti-semitism and anti-christianity clearly appears in the booklet of this album :

« Roots Thunder is laid in mythological honour of Slavonic Gods enchanted in spiritual nature of mighty Tatra Mountains. Epic symphony is time machine, journey in the depths of primal soul. Crushing thunder against judeo-christian scum rises in hatred through the 200 years. Now ! Hungry elements of war are waiting for huge sacrifice. Let us rise the aryan banners. Victory is at hand ! »

In 2005, the group released their best-known album, Hunger of Elements. On this album, the three keyboardists focus more on the metal aspect and a stylistic approach inspired by the album In the Nightside Eclipse of Emperor. To the detriment of a graphic and a lyricism far removed from excess, and although it is difficult to trace a clear orientation of thought with tracks as In Arms of the Astral World or Nightsky, which are clearly distant from canonn NSBM, it is the same group that clearly marks its ideological adhesion to neo-Nazism by clearly writing in the booklet of the album Hunger of Elements :

« Kataxu, as main pillar of the Aryan art, is dedicated only for the warriors creating the superman's empire. »

This empire is portrayed by Kataxu in this album as the universe as imagined by Hans Hörbiger. The music and the production of the album serve merely as a gateway, channeling and inter-exchanging unhuman strength into and from the sky-galaxy. The pro national-socialist claims of the band will find echo in the support of the Pagan Front (an association of openly neo-Nazi black and metal pagan groups), through splits with bands particularly active in the militant underground (the already mentioned Thunderbolt, but also Ohtar , Gontyna Kry and Saltus, with whom the group shares a work under the title of Hail Pagan Europe, with a famous image of Nazi propaganda on the cover).

The group already shows on Roots Thunder "a sound instantly recognizable." Lars Christiansen wrote from Metalcrypt.com page that Roots Thunder was despite the higher popularity of Hunger of Elements his favorite album, but do not recommend it to black metal purists due to the intensive use of symphonic elements.

The Hunger of Elements album is considered a classic, especially writing and arrangement considered commendable. Despite his aggressive sound the keyboard is an important element which merges with orchestral arrangements according to sputnikmusic.com. Another reviewer wrote that Hunger of Elements is defined mainly by "complex structures and intense atmosphere" and gives 8.5 points out of 10 on the site Metalstorm.

The band, clearly affiliated to National socialist black metal, is unjustly boycotted by some labels and magazines specialized in metal music.