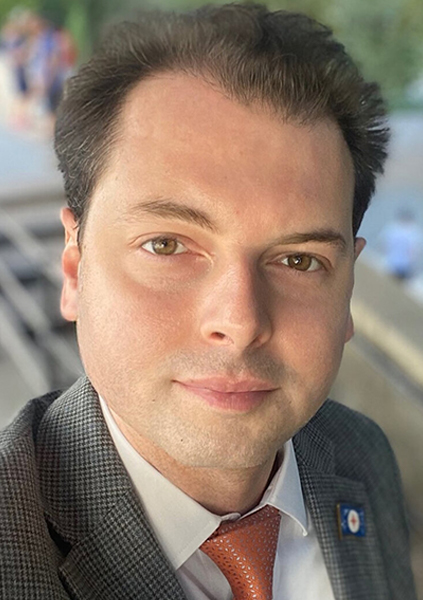 Jason Reza Jorjani was born and raised in Manhattan, New York, the only child of an Iranian immigrant father and a mother who comes from a working class family of "northern European heritage."

He attended the Dalton School, one of the most exclusive private schools on the Upper East Side. After high school, he attended Fordham University for a year before transferring to New York University, where he earned undergraduate and graduate degrees.

While serving as a full-time faculty member at the New Jersey Institute of Technology, Jorjani taught courses on science, technology, and society (STS), the philosophy of Martin Heidegger, and the history of Iran.[1] In 2016, Jorjani became editor of right-wing publisher Arktos Media.

In September 2017, Jorjani was suspended from his teaching position at the New Jersey Institute of Technology in response to a covert video recorded by Patrik Hermansson, an openly gay Swedish antifascist activist, in which Jorjani predicted a future where concentration camps would return to Europe and Adolf Hitler would appear on European currency by 2050.

Jorjani claimed that his remarks were spliced into pieces from a two-hour conversation and rearranged out of context, and that the prediction was a warning of a dystopian future, not an endorsement.[2][3]

In February 2017, NJIT officials told Jorjani they would not renew his annual teaching contract. In July 2018, Jorjani filed for a $25M lawsuit against NJIT, alleging that campus officials violated Jornani's constitutional right to freedom of speech and association and that campus leaders and colleagues subsequently defamed Jorjani in campus-wide emails and in the student newspaper. Denise Anderson, a spokeswoman for the school, denied the allegations and said, “Dr. Jorjani’s claims of wrongdoing by the university or its representatives are untrue, and we intend to vigorously defend against any such claims.”[4]

Founding of the AltRight Corporation

In January 2017, Jorjani co-founded AltRight Corporation and AltRight.com with Richard Spencer before resigning less than a year later in August 2017, for the stated reasons that he wanted to commit to the Iranian Renaissance,[5] a 501(c)(3) cultural organization.[3][6] Jorjani ultimately took a negative view of the AltRight Corporation, referring to it as a "miscarriage" and "total failure".[7]

Support for eugenics in Iran

Jorjani has written in support of eugenics and has claimed that Iran cannot culturally, technologically, and scientifically advance unless it restores its "pre-Arab and pre-Mongol genetic character":

The Arab-Muslim invasion was bad, but once this was compounded by the genocidal Turkic and Mongol conquests of Iran, a demographic shift took place that deprived Iran of the genetic basis for the production of a Hegel, Nietzsche, or Heidegger. Such men are less than one in a million, even in a genetically pure Aryan population. But their thinking goes on to impact millions in the broader intellectual culture of their nation. Now, I’m not saying that for this reason Iran will never produce thinkers on this level again. With the emerging technologies of embryo selection and genetic engineering, it would be possible, with the right leadership and government planning, to restore the pre-Arab and pre-Mongol genetic character of the majority of the Iranian population within only one or two generations. I’m sorry to have to suggest that this might be necessary in order to Make Iran Great Again.[8]