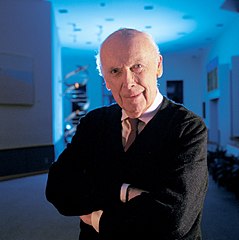 James Dewey Watson, born April 6, 1928 in Chicago, Illinois, USA, is an American scientist, mostly known as one of the four co-discoverers of the structure of DNA. Watson, Francis Crick, and Maurice Wilkins were awarded the 1962 Nobel Prize in Physiology or Medicine "for their discoveries concerning the molecular structure of nucleic acids and its significance for information transfer in living material".

James Dewey Watson was born on April 6, 1928 in Chicago Illinois. He is the only son of James D. Watson, a businessman, and Jean Mitchell. James' entire childhood was spend in Chicago, where he attended the Horace Mann Grammar School for eight years, then another two years at South Shore High School.

Ever since he was young Watson had an interest in birds, which stirred him to learn genetics. He was greatly influenced by geneticists H. J. Muller and T. M. Sonneborn, who were faculty of Indiana's Bacteriology Department. With the guidance of S. E. Luria, Watson's Ph. D. thesis was a study of the effect of hard x-rays on bacteriophage multiplication. From 1950 to 1951 he worked in Copenhagen as a Merck Fellow of the National Research Council. While there he studied bacteria viruses, investigating the DNA of infecting viruses.

In the spring of 1951, Watson went to the Zoological Station at Naples and in late May met Maurice Wilkins. Wilkins showed him the x-ray diffraction pattern of crystalline DNA that he discovered. Watson then changed his research to structural chemistry of nucleic acid and proteins. He began working at Cavendish Laboratory at the University of Cambridge in October 1952, where he met Francis Crick. The two men shared an interest in discovering the DNA structure and began their efforts together. All efforts were unsuccessful until March of 1953 when they used more experimental evidence and literature to come up with the double helix model. From 1953 to 1955 Watson was at the California Institute of Technology as Senior Research Fellow in Biology. Along with Alexander Rich, he studied RNA with x-ray diffraction. Watson worked again with Crick back at Cavendish from 1955-1956 publishing papers together on the principles of virus construction.[2]

Watson then became a member of the Harvard Biology Department faculty as Assistant Professor in 1956, was promoted to Associate Professor in 1958 and then to Professor in 1961, where he researched the role of RNA in protein synthesis. Watson, Crick and Wilkins shared the 1962 Nobel Prize in physiology or medicine.[[2]]

In November 2014 Watson decided to sell his Nobel medal, he claims that he was forced to auction off the prize after being ostracized for seven years, following his public comments about black African IQ in 2007, which were widely deemed racist.[1] Part of the funds would go to scientific research.

In December he sold the medal to russian billonaire and tycoon Alisher Usmanov for 4.8 million dollars who in turn immediately returned the medal to Watson and stated that he "deserved" the medal.[2]

Lasker Award with Crick and Wilkins, 1960

Foreign Membership of the Danish Academy of Arts and Sciences