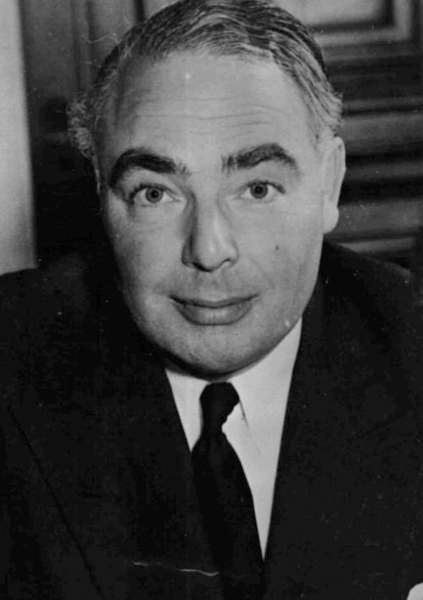 Hore-Belisha was born in Plymouth, the only son of Jacob Isaac Belisha, a Jewish insurance company manager. He studied at Oxford and became qualified as a lawyer. By the early 1920s, he was active in politics, as a member of the National Liberal Party which was in the National coalition government.[1] From 1942-1945 he changed his official affiliation to 'Independent'.[2]

A Tireless Agitator for War

Hore-Belisha had been Minister of Transport (he had introduced the Driving Test) when appointed by Prime Minister Neville Chamberlain to the new National Government cabinet in 1937 as Minister for War, H-B announcing he was going to make "drastic changes".[3] Alan Clark, the historian and Member of Parliament, wrote: "The promotion of Hore-Belisha" was an error of calculation by Chamberlain.....not since Horatio Bottomley had anyone been quite so transparently on the make........He was the only other person who could match Churchill's gft for opportunist publicity".[4]

Hore-Belisha became a perennial agitator for escalation of tensions with Germany in the late 1930s, and for war. He fought to introduce conscription in 1938, which succeeded by early 1939. He likewise worked to modernize the British military to put it on a footing ready to make offensive war abroad.[5] In a milder version of Stalin's Great Purge of the same era, Hore-Belisha fired several high-ranking military officials who were insufficiently "hawkish". He gained many enemies in the military and government in the process, which led to a populist backlash against him.[6]

British nationalists and conservatives complained about Hore-Belisha's obvious agitation to get Britain into a war "for Jewish interests" rather than for any possible remote interests of Britain. He was often accused of being a closet supporter of the USSR, despite his alleged "conservatism" as a member of the Liberal Party and later the Tories. Many called for his removal from office.

Field Marshall John Dill and Lord Gort were among the prominent opponents and critics of Hore-Belisha from within the British military. Gort -- who would go on to be the leader of the British Expeditionary Force in France -- was said to be so annoyed by the pretentious-snideness of Hore-Belisha, that he refused to be in the same room as the Jewish Minister of War.

In the early months of the war, a popular song, inspired by Hore-Belisha, became popular in the British armed forces. It was sun to the tune of "Onward, Christian Soldiers":

Onward Christian Soldiers,
You have nought to fear.
Israel Hore-Belisha
Will lead you from the rear.
Clothed by Monty Burton,
fed on Lyons pies;
Die for Jewish freedom
As a Briton always dies.

When word of the song reached him, Hore-Belisha issued a proclamation banning members of the military from singing it.

Some historians have identified Hore-Belisha as one of the primary figures responsible for leading Britain to declare war on Germany on September 3rd, 1939: "Beside Winston Churchill, Anthony Eden, and Robert Vansittart, Hore-Belisha is the main person responsible for the British declaration of war against Germany."[7] Certainly he was invited to join the special War Cabinet on September 1st, but apart from Churchill the others mentioned here were not included.[8]

At the end of 1939 a cabinet reshuffle was discussed and Hore-Belisha had indicated he would now like to be Minister of Supply, if moved from the War Ministry.[9] Chamberlain had proposed he be moved to Minister of Information (Propaganda) which was opposed by Lord Halifax, the Foreign Secretary, who said: "H-B at Information.....would have a bad effect on Neutrals both because he was a Jew, and because his methods would let down British prestige." On 4 January 1940 Chamberlain therefore sacked him, after two years and seven months at the War Office, and reluctantly offered Hore-Belisha the post of Minister of Trade, but, aggrieved[10], H-B declined. He felt in particular he had been let down by Churchill. Chamberlain wrote of him that "unfortunately he has the defects of his qualities, partly from his impatience and eagerness, partly from a self-centredness which makes him careless of other people's feelings. Nothing could be worse than perpetual friction and want of confidence between the Secretary of State and the Commander-in-Chief in the field".[11]

Hore-Belisha's subsequent career saw him out of government through the 1940s, although he was briefly Minister of National Insurance[12], but he never again was in as prominent a position as Minister of War.