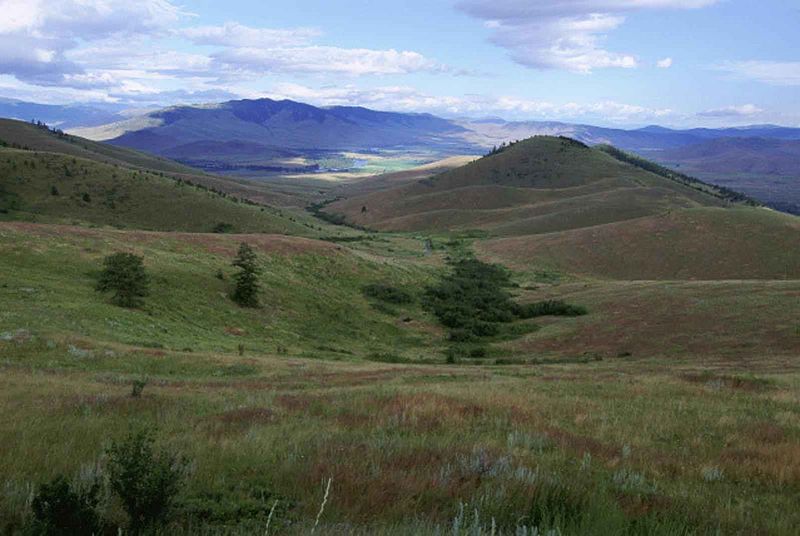 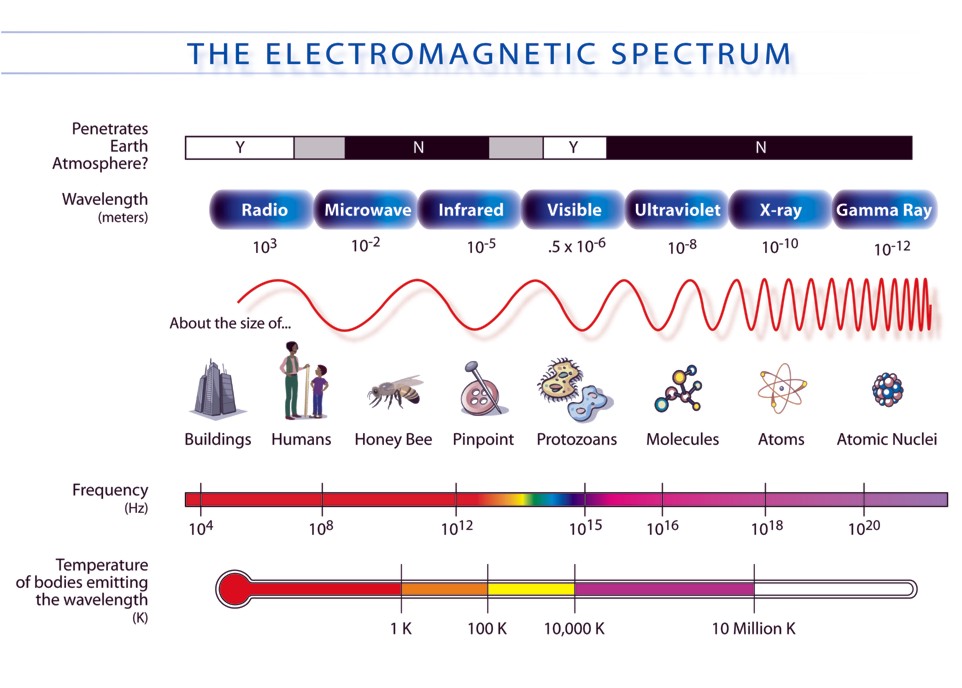 Diagram illustrating the electromagnetic spectrum and various associated characteristics. This spectrum is perfectly continuous but some divisions are despite this more useful and internally similar than others. For example, the group of wavelengths constituting the X-rays is (despite somewhat fuzzy borders) a more useful and internally similar group than a group consisting of randomly selected wavelengths from all over the spectrum. Furthermore, large differences in wavelengths are associated with markedly different properties and effects despite the spectrum being continuous. Another point is that if picking out some wavelengths and placing them next to one another (such as the wavelengths corresponding to the colors green, yellow, and red in a traffic light), then there is no longer a continuous change but discrete changes. This also applies to human such as when groups from different areas with different skin color migrate to the same area.

A cline is a graduation in a measurable characteristic within and between groups.

The Nature of Race

The 2015 peer reviewed book The Nature of Race: the Genealogy of the Concept and the Biological Construct’s Contemporaneous Utility stated that:[1]

When discussing biological race, often the term "cline" is coughed up as a sort of retort. The American Anthropological Association even has a module called "Races or clines?" (Italics added). The term "cline" was introduced by Julian Huxley (1939). Huxley introduced it in order to correct for what he saw as deficiencies arising from the practice of focusing solely on subspecific group differences. He noted:

Some special term seems desirable to direct attention to variation within groups, and I propose the word cline, meaning a graduation in measurable characters. This, being technical, seems preferable to such terms as characteristic-gradient or phrases such as 'geographical progression of characters', used by W. F. Reining in his recent book "Elimination und Selektion" ...

It is in no way intended that specification by clines should replace any of the current taxonomic methods. It would constitute a supplementary method which, it is suggested, would correct certain defects inherent in that of naming areal groups notably in stressing continuity and regularity of variation as against mere distinctiveness of groups. It is important to note that clines for different characters may run in different directions (shrikes, fox-sparrows, lincoln sparrows, etc.).

Huxley did not see clines and races as antithetical, hence he allowed for intersubspecies clines. More to the point, his cline concept describes a character gradient. As such, a "cline is an arrangement of characters, not of organisms or of populations" (Simpson, 1961). As a result, a race can belong to as many different clines as it has characters; if it belongs to more than one, it is no less a race.

As we noted above, with races, individuals are grouped based on their overall genetic similarity. This similarity is evidenced by similarity in concordant specific characters. That is, relatedness in clusters of specific characters, phenotypic and genetic (e.g., specific genetic loci) are used to infer overall relatedness. Clines do not even describe divisions of organisms; they describe characters. The juxtaposition of clines (characters) with races (divisions of organisms), then, represents a categorical confusion. Properly understood, there is no “cline versus race” debate.

Population structure refers to the geographic arrangement of local populations across the species' range. Population structure can be described in terms of three phenomena: the population continuum, geographic isolates, and zones of secondary intergradation (hybrid zones) (e.g., Mayr and Ashlock, 1991). The population continuum is that part of the species' range where there is continuity of contact among local populations, some of which may be recognized as subspecies if sufficiently differentiated. [Emphasis added.]

The point will be discussed later, but even here it is advisable just to mention that such arbitrary subdivision does not necessarily produce taxa that are either 'unreal' or 'unnatural,' as has sometimes been stated. A simple but, at this point, sufficient explanatory analogy is provided by a piece of string that shades continuously from, say, blue at one end to green at the other. Cutting the string into two is an arbitrary act, but the resulting pieces are perfectly real section of the string that existed as natural parts of the whole before they were severed.

Simpson (1961) was correct that dividing a perfect continuum would result in empirically arbitrary delineations. But rarely are we faced with perfect continua. As a result, non-arbitrary or objective delineations of groups can be had (e.g., using unsupervised cluster mapping programs). So long as the underlying natural divisions exhibit “small discontinuous jumps in genetic distance” between them (Rosenberg et al., 2005), clusters can be identified objectively at a given grain of focus. These clusters can then be used to infer objectively delineated races.

“Grain of focus,” “grain of analysis,” or “level of genetic analysis” refer to the fact that one can look at different degrees of genetic relatedness when dealing with natural divisions. The analogy is to a microscope where one can zoom in and out for, respectively, finer and coarser grains of focus. A coarser grain would mean looking at larger degrees of genetic differentiation. When racial divisions are cut out at a coarser grain, there would be fewer of them – they would represent the major racial divisions of a species. At a finer grain, more divisions can be cut out – one would, effectively, subdivide or split those divisions identified at a coarser grain. The “grain of focus” issue is also known as the lumper and splitter issue, which refers to the fact that one can aggregate and divide natural populations into, respectively, larger and smaller groupings. This issue exists on all levels when it comes to natural divisions. In taxonomic hierarchy, for example, family represents a coarser grain of focus than genus, genus than species, and species than subspecies. It is impossible to objectively define a “true” grain of focus – class, for example, is not a more true level of genetic analysis than species – but given a grain of focus, one can objectively delineate races, so long as there are small genomic discontinuities between them.

As this is an issue which many get confused, we will clarify it thusly: The structure of a population is either continuous (continua), discontinuous (isolates), or once discontinuous but since reconnected (zones of intergradation); when there are continua there will be innumerous character clines running the same way like a bundle of wires. Races are determined by the past population structure of a species. Races that are deemed to be sufficiently interesting are recognized formally as taxa subspecies. Neither continua nor zones of intergradation past or present are inconsistent with the presence of subspecies, let alone lesser races. Continua, as discussed in section IV, nonetheless argue against the formal recognition of races. Since continua are not inconsistent with races and since along continua many clines will run concordantly, clines, per se, are not either; though, clines, insofar as they evidence continua, argue against the formal recognition of races. Cluster is an ambiguous term; it can mean “bundles of correlated characters” or “the statistical output from a cluster analysis program.” Clusters as bundles of correlated characters evidence natural contra artificial divisions, since natural divisions are based on overall genetic similarity, which entails concordant characters. When there is a continua, clines “cluster” in the sense that they tend to run in the same direction and thus form “bundles of correlated characters” viewed cross-sectionally. Clusters, as bundles of characteristics, then are not necessarily inconsistent with clines. Unsupervised cluster analysis programs can identify natural divisions when there are small genetic discontinuities; that is, they can identify isolates. These identified divisions have been called “clusters”; thus “cluster” has come to mean also “isolates,” that is, discontinuous natural divisions. While isolates, insofar as they are natural divisions, are races, race is a broader concept, one which includes natural divisions cut out of a continuum."