From Metapedia
(Redirected from Cambodian)
Jump to: navigation, search 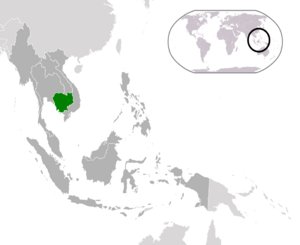 Cambodia is a country in Southeast Asia.

Cambodia had the Communist Khmer Rouge regime between 1975 and 1979. It evacuated the cities, and sent the entire population on forced marches to rural work projects. They attempted to rebuild the country's agriculture on the model of the 11th century, discarded Western medicine and destroyed temples, libraries, and anything considered Western. Targeted groups included intellectuals. Estimates as to how many people were killed by the Khmer Rouge regime range from approximately one to three million; the most commonly cited figure is two million (about a quarter of the population).

Part of this article consists of modified text from Wikipedia, and the article is therefore licensed under GFDL.
Retrieved from "http://en.metapedia.org/m/index.php?title=Cambodia&oldid=452042"
Categories: