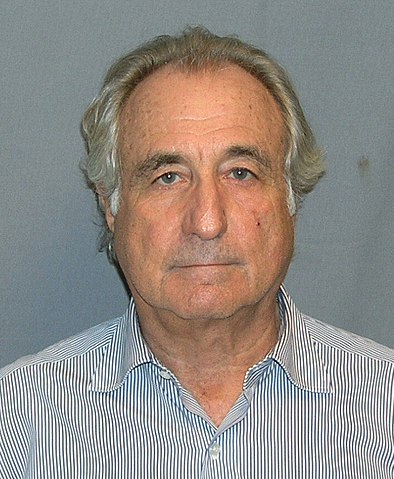 Bernard Lawrence Madoff (29 April 1938 - 14 April 2021) was a Jewish former market maker, investment advisor, financier, fraudster, and convicted felon, who was serving a federal prison sentence for offenses related to a massive Ponzi scheme. He was the former non-executive chairman of the NASDAQ stock market, the confessed operator of the largest Ponzi scheme in world history, and the largest financial fraud in U.S. history. On June 29, 2009, Madoff was sentenced to 150 years in prison, the maximum allowed.

Prosecutors estimated the fraud to be worth $64.8 billion based on the amounts in the accounts of Madoff's 4,800 clients as of November 30, 2008. This included fabricated gains. The Securities Investor Protection Corporation (SIPC) trustee estimated actual losses to investors of $18 billion.

Madoff claimed that he acted alone, but various relatives and associates have been suspected and sometimes sentenced for associated crimes.

Part of this article consists of modified text from Wikipedia, and the article is therefore licensed under GFDL.
Retrieved from "http://en.metapedia.org/m/index.php?title=Bernie_Madoff&oldid=456780"
Categories: