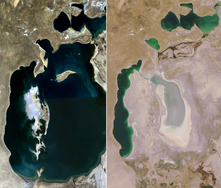 The Aral Sea was the world's fourth-largest lake, lying between Kazakhstan in the north and Uzbekistan in the south. Due to irrigation policies starting during the Communist era and continued afterwards, it has almost completely disappeared. The shrinking of the Aral Sea has been called "one of the planet's worst environmental disasters". The gradual disappearance of the lake was no surprise to the Soviet Communists; they had actually expected it to happen faster.

Part of this article consists of modified text from Wikipedia, and the article is therefore licensed under GFDL.
Retrieved from "http://en.metapedia.org/m/index.php?title=Aral_Sea_environmental_disaster&oldid=437765"
Categories: