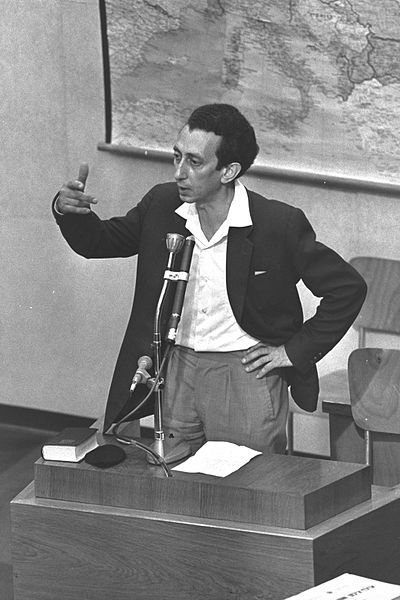 Kovner testifies at the trial of Adolf Eichmann. Kovner himself was not prosecuted despite his involvement in the plan to kill six million Germans and other crimes.

He was also a founder of the Nakam organization that planned to kill six million Germans and committed various crimes.

During the 1947–1949 Palestine war, he wrote propaganda writings referred to the Egyptian enemy as vipers and dogs.

As a partisan, he followed Soviet Communist command and in Israel supported a Marxist party.

He played a major part in the design and construction of several Holocaust museums and testified at the Eichmann trial.

Despite his participation in crimes, he was not prosecuted and is considered one of the greatest poets in modern Israel and received the Israel Prize in 1970.

Part of this article consists of modified text from Wikipedia, and the article is therefore licensed under GFDL.
Retrieved from "http://en.metapedia.org/m/index.php?title=Abba_Kovner&oldid=451841"
Categories: