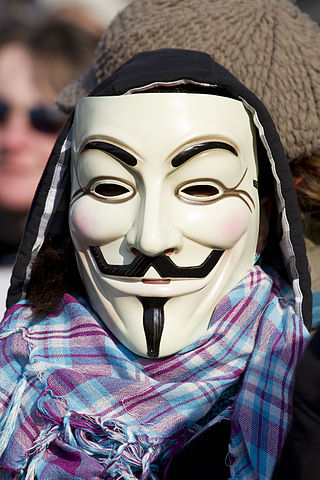 A protestor wearing a Guy Fawkes mask. Stylised depictions of Guy Fawkes have been used on Guy Fawkes Night, which inspired the pro-social anarchist comic/movie V for Vendetta, in turn inspiring use by others, despite often having little in common with the Catholic Guy Fawkes and despite that the plot would have killed and wounded many people if successful.

Guy Fawkes (1570 - 1606) was an English convert to Catholicism and the best-known participant in the Gunpowder Plot, which planned to blow up the palace at Westminster during the state opening of Parliament, while James I, many supporters, and many others met within. James I was planned to be replaced by a Catholic monarch.

The plot was discovered. Fawkes was tortured, revealed his co-conspirators, and killed himself immediately before he was to be hanged, drawn and quartered.

The failure of the plot is commemorated in Britain on November 5 as Guy Fawkes Night.