From Metapedia
(Redirected from Rockwellian)
Jump to: navigation, search 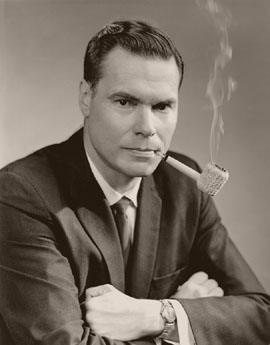 George Lincoln Rockwell (9 March 1918 – 25 August 1967) was an American National Socialist. He was possibly the first in the postwar period in the United States to prominently use National Socialist symbolism.

In 1959, he was discharged from the United States Navy, where he had attained the rank of commander, because of his political views.

Rockwell founded the World Union of Free Enterprise National Socialists in 1959. In 1960, this was changed to the American Nazi Party. Before Rockwell's death, it is stated to have had about 500 followers, but declined afterwards.

Rockwell and his party made various spectacular and controversial actions, which may have been intended to receive wide publicity in the media and/or to be ironical regarding political correctness. Examples may include using "Nazi" instead of National Socialist, starting a small record label named "Hatenanny", driving a "Hate bus", and others.

However, before his death, Rockwell made various changes, using somewhat less controversial rhetoric. The name was changed to National Socialist White People's Party (NSWPP). In 1966, after hearing the slogan "Black Power" during a debate with the Black Panther Party, Rockwell used the slogan "White Power" instead of "Sieg Heil!" and the publication The Stormtrooper was replaced with one named White Power.

Rockwell had relatively amiable relations with Black nationalists, such as Elijah Muhammad and Malcolm X, since they shared the goal of racial segregation / separation.

He was a founder of the World Union of National Socialists.

Rockwell was a Holocaust revisionist.

In 1967, Rockwell was murdered by a former party member. who had been expelled by Rockwell for repeated attempts to inject Marxist ideas into party publications.

Some sources claim that Rockwell was prominent in moving from Nordicism towards more general White nationalism, which may be dubious, as his views on this, as in his book White Power (1967), may have been similar to those stated long before this by Lothrop Stoddard.

Part of this article consists of modified text from Wikipedia, and the article is therefore licensed under GFDL.
Retrieved from "http://en.metapedia.org/m/index.php?title=George_Lincoln_Rockwell&oldid=449850"
Categories: